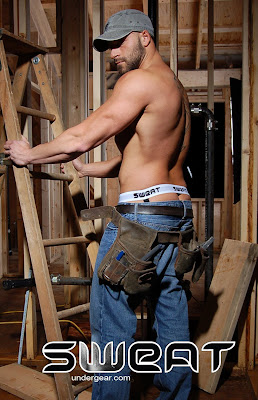 Based in Vancouver, British Columbia, The Sweat Under Gear Group provide today’s man with a line that reflects his athletic, fashionable and masculine lifestyle. The company’s mission is “to compliment the body of today’s man with products that speak to his lifestyle and sense of masculinity.”

Sweat Under Gear is a relative new comer to the world of Men’s underwear.

They are a company that is based in Vancouver that launched in July of 2008. The founders, Tal and Ron, wanted to make a high quality line that men would feel comfortable wearing anywhere including work, gym or out. The line started with 5 core designs and two colors, black and white. They kept the line small and will add more lines and underwear over the next year.

The company received a lot of buzz on the internet, even before they launched. Over a year ago they took the initial pictures, just to get their name out. They never expected them to generate the attention they received. Bloggers all over started to talk about this new company. This brought about attention from consumers and also photographers and industry people. They have received offers from photographers, models and other companies to help with the promotion of the company. The power of blogging and the internet is something Tal and Ron, didn’t set out to do, but has turned out to be one of the best ways of promoting their brand.

In a previous post, we went over the line, but the current product line is; Sweat Briefs, Sweat

Jocks, Sweat Fighter Briefs, Sweat Sports Briefs and Sweat Trunks. The development into this line took over a year to get the quality to a level that met their standards. They wanted a line that shows off the masculinity of men at any age group. They aren’t focusing on the guys in their 20’s. No matter the age, they want guys to be comfortable and look great.

One of the things they have done that has really made them stand out is their advertising. They concept of the advertising is the Sweat Club, and each room represents a product in their line. The purpose is that no matter what a guy does, we’re all equal. You could be a white collar or blue collar, but at the club everyone is the same. The ads are well done and very creative. As they ad products they can continue the campaign and keep coming up with creative concepts. You can see many of the pictures on their website and blog. The blog has a lot of pictures that you may not have seen on their site. They are constantly updating the blog

and it’s a great way to keep up to date on them.

One of our favorite things this year was their calendar. Which if you didn’t get one, they are sold out. But never fear that will more then likely do it next year. It was a great high quality calendar that shows all the products of Sweat. When talking to Tal, they decided to do it but didn’t expect the success they had with it. It is one of my favorite calendars and as they release more, I will continue to get one each year.

As the company grows they are getting more opportunities to show case their underwear. One thing we have reported is the movie they are going to do, they will be providing underwear for the male cast. There are a few scenes where the cast is in the locker room and various other locations. Also they are doing two different model searches. In Canada they are doing the “Next Gay Supermodel” and the one in the US is in the works. As these develop we hope to bring you pictures and information about them.

The brand has had a few celebrities wear them too. The adult film star Zeb Atlas is a fan of the brand and has worn them at a few appearances. You can go to their blog and see more pictures 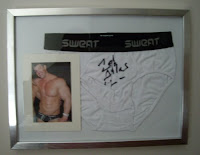 of him in the Sweat briefs. Another group that has discovered the brand is a few members of Dante’s Cove and the Lair. Both shows geared to Gay Audiences. We may see more Sweat in both of these shows but nothing has been set as of yet. With all this attention they have started a really cool concept, a Wall of Fame, where celebrities sign briefs and they frame and have put them on a wall in their offices. It started with Zeb Atlas and has grown to Dante’s Cove and will continue to grow.

Some things in the works for them is a new work out wear line. This should be ready by the spring. They are testing it now and as more develops we will keep you posted. The one thing that really impressed me was that both Tal and Ron are wearing the new line to the gym testing the gear. They are making changes and final tweaks before it’s released.

Sweat Under Gear is one of the up and coming companies that have come out strong in the world of underwear. They started small in their product offerings but will grow and create more great underwear and work out wear. We look forward to seeing more products over the next year and with them much success in the future. We here at UNB will keep you posted as they grow. 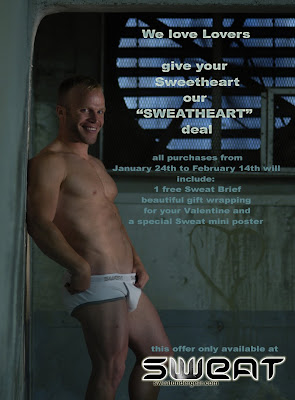 The last thing is that they are doing a special promotion for Valentine’s day. They are doing their “Sweetheart Deal.” All purchases made from Jan 24th, through February 14th will receive a Sweat Brief gift wrapped for you special guy. And that’s not all you will also receive a special mini poster as well. You can say you heard of this deal from us here at UNB. So if you have been waiting to get some Sweat underwear, this is a perfect opportunity. To get this deal, you need to go on the Sweat Under Gear website.