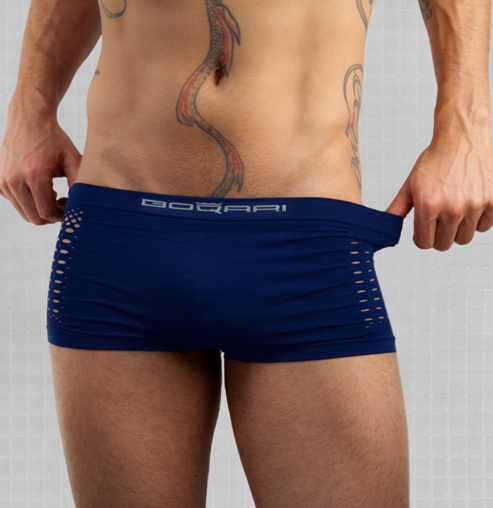 This review is majorly overdue.  I received these at the end of July and then I attended Magic/Curve.  Shortly after, I battled with a short illness that put me over a month behind with my reviews.  That being said, I want to apologize to Boqari for getting this up so late.

Here is what Boqari says about their underwear:

“Our Mission is to design the sexiest, most comfortable men’s underwear in the world.’ says designer JJ Boqari.  “These designs are sexy, modern, sleek…like nothing you’ve seen before.  And they look equally sexy on men and women.  In fact, most of our designs are gender fluid.  We think everybody is sexy.”

I found that the underwear comes in two sizes…S/M (28-33) and L/X (34-40)…with me being on the L/XL side.  I pulled them out of the package, thinking that these would not fit me.  To my surprise, they did fit.  They didn’t ride down (you know when a size is too small and they won’t stay up), bind, or anything to make them uncomfortable. 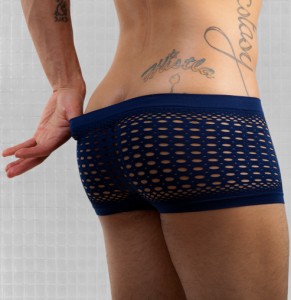 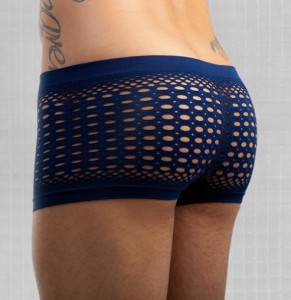 The Jamaica Mesh is the pair I received.  I wasn’t sure about the back being a series of holes and was concerned about how that would work during the day.  I decided to wear them on a day I wouldn’t be doing much.  If needed, I would be in a position to take them off.  The mesh really didn’t bother me, in fact, due to the no-seams material.  I will admit that I judged a book by its cover when I took them out of the package.  I knew right away I wasn’t going to like them because they wouldn’t fit me and the mesh would drive me nuts.

Another judgment I had was the seamless material.  I won’t mention another brand name, but they had a seamless pair that lost its shape.  They were simply not well made.  I was hoping these wouldn’t do that and they held up awesomely.

I say you have to sometimes try undies outside the box.  I really liked these even when I didn’t think I would.  They are super fun and sexy.  You can check them out at the Boqari website.  These were furnished for review.