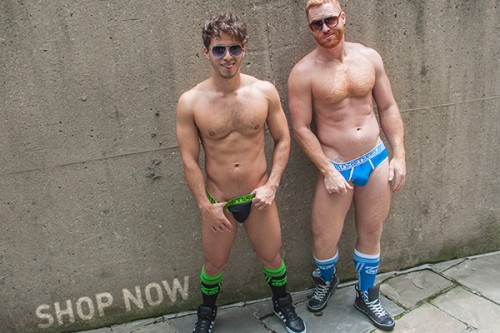 Nasty Pig is known for their super hot fetishwear. Many of our readers have quite a few pairs from them and enjoy them. I have seen a lot of pics out there of you guys in it! Now they have released the the Laser line. Which as you can tell by he pic you can make it match some fetish wear or wear it as regular underwear.

“In keeping with our Spring 2015 Altered States collection, we wanted to present a new spin on our name. We honed in on this digital font and created a futuristic jock in two great colors.” The pairs just come in blue and black. The black has a green waistband and the blue has a matching band. The font they mention above is a lot of fun. Those who know of the brand will get it but those who don’t may just think it’s a funky design.

The Laser is in two styles, a brief and a jock. What would Nasty Pig be without a jock. The brief is a little more traditional in its cut and sign. But still super sexy. I would say the black would be more easy to match in fetishwear over the blue. However, that said we have some super creative readers.

If you love these go to the Nasty Pig site to pick them up. The jock and brief both retail for $29 each.