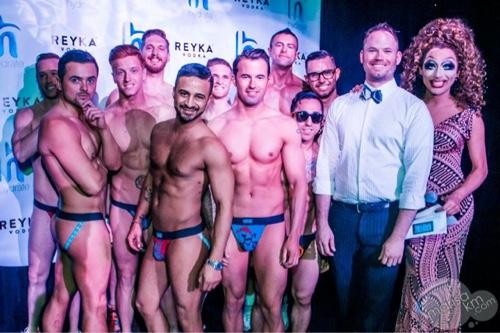 A lot has happened since we last talked to Crochet Empire. They got funded on Kickstarter and has started making some amazing jocks. Andy the head Jock maker agreed to answer a few questions.

More brands are starting to use Kickstarter to get the funds to start their lines. How did the Kickstarter go for you guys?

Kickstarter went great. The campaign was funded within 24 hours and ended up being 208% funded.

After you launched the line has the jocks design changed any? If so what improvements did you make

One of the benefits of Kickstarter is I had a lot of opportunity to develop the shape of the pouch. I received feedback about some gaps in the fit and have made the pocket a little fuller. I think the shape is pretty right on now. I’ve tried a few different straps and have settled on to a comfortable waist band that’s not thick. I’m very happy with all the components.

The Crochet Empire jocks are so unique and different. How are you getting the word out about the jocks?

Right now most of the marketing is done through social media. There have been a couple blogs like Underwear News Briefs that have been very supportive and done some features.

The Jocks are handmade, which is rare in the world of men’s underwear. How do you keep up with demand?

I have noticed a few designs such as Tardis from Doctor Who, Game of Thrones. Is there a geeky side we are seeing come out?

I’m a big fantasy nerd and one of the great things about this work is I can make one off designs. It seems like a lot of the people requesting custom orders are interested in the geekier side. So, it’s been a combination of things I like to make and what is being requested.

Jockstrap Wednesday has become a big thing on Twitter. Have you seen more of your jocks on guys because of this?

I haven’t been tagged in any posts if people are posting photos.

If you could get your jock on any celebrity or sports start who would be your dream guy to clothe?

I’m very excited that recently my jocks were worn by Jack Mackenroth and Seth Fornea. Jack’s picture in his jock is one of his most liked on Instagram.

If I had my dream, I’d love to have pictures of Jonathan Toews and Patrick Sharp together in them. Woof. I wouldn’t be upset if one ended up on Chris Evans.

Many guys may see the jock and be hesitant about a crochet jock. They may think it maybe fragile or not comfortable to wear. what would you tell these guys to get them to try them?

I use a very thin, soft yarn called “sock yarn,” and only yarn that is machine washable. The pouches are very soft and breathe well. I think a lot of people think it’ll be like wrapping your winter scarf around your junk and it’ll be hot and and scratchy. The jocks are neither of those.

What are you planning of the future to take over the world of jocks?

I’m doing some reorganizing of lines and streamlining some things. I’m looking at events to attend and am hopefully attending MAL in DC in January. Everyone should keep an eye out for some really sexy stuff coming out in October.

We want to thank Andy for his time answering our questions. Find out more about them at the Crochet Empire website.