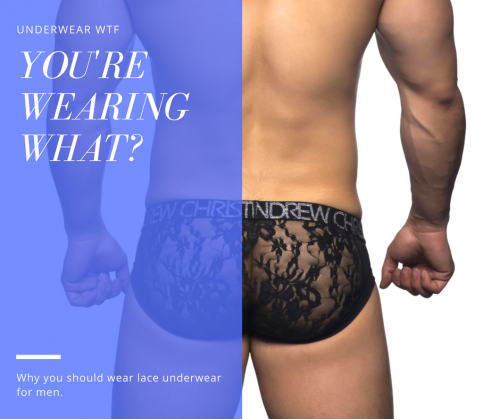 You’re here, reading a men’s underwear blog. You’re obviously open to and into different styles and fabrics than the typical Hanes boxer that 90% of your friends and co-workers wear. But would you wear…lace underwear.

I’m speaking from the perspective of a straight guy, but I think true lace underwear made for men has several advantages and reasons to wear regardless of your sexual orientation.

First, have you honestly ever worn anything lace? You know the saying ‘don’t knock it until you’ve tried it’? Gay or straight, don’t say anything bad about lace until you’ve worn it and can give a firsthand account. It’s the same discussion that always comes up about thongs, and we know that’s a rapidly growing segment.

I’m about to embark on my first journey into lace underwear in the next few weeks, and I couldn’t be more excited. Spend 5 minutes looking at women’s panties or lingerie. A ton of it is lace. Clearly, there’s something to it, whether it’s pure sexiness or actual comfort. Ask a girl why she wears a lace thong, and I guarantee it’s either she likes how sexy it makes her feel or how sexy it makes her look. Maybe it’s the best feeling material ever. If you’ve never worn it, you’d never know.

For a second point, maybe you’ve randomly tried on a pair of lace panties. Maybe it was a joke, on a dare, or just out of curiosity. But you thought it felt ‘weird’ or didn’t fit right or just felt wrong. I’d argue that if you tried a pair of true men’s underwear that just happens to be made out of lace you’d have a much more positive outlook. The concept of pouches and anatomically correct underwear has been the single biggest reason I’m so excited about underwear. Please…wear a pair of true men’s anatomical underwear, regardless of material, and THEN try to tell me it didn’t feel right.

Lastly, I understand some guys are embarrassed or ashamed to be caught wearing lace underwear or having it in your drawer. I know the first comment from most females if they find a black lace thong in your laundry or drawer is ‘whose panties are these???’ But if it has a male pouch or ‘Andrew Christian’ on the waistband, it makes it easier to explain that yes, the lace underwear belongs to you.

Those are all reasons why I’m excited to dive into lace underwear. Who knows how good it feels? The amount of female underwear made out of lace makes me positive that it has to feel amazing. I also think it looks hot as hell, regardless of who is wearing it. And I think the current reaction to it being so taboo or scandalous makes it that much hotter. The most mundane workday becomes fun when you’re wearing lace underwear that would make every coworker’s jaw drop if they knew what you’re wearing. I can’t wait. Stay tuned…