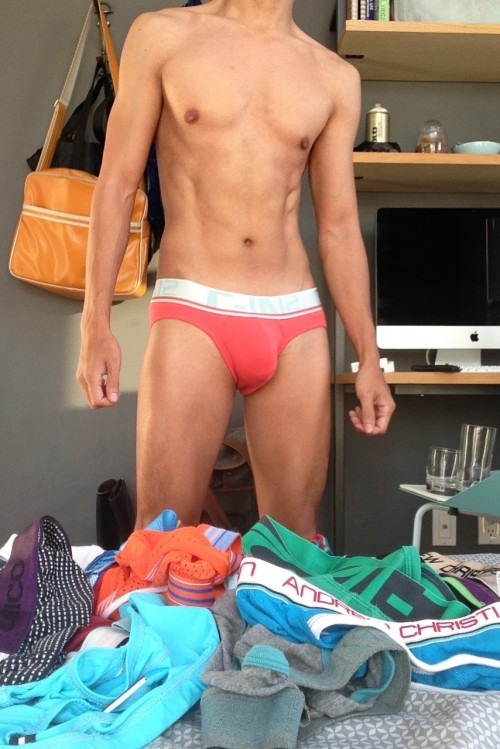 Sometime around middle school I became very interested in the ad circulars in the Sunday paper. Sears, Dillard’s, JC Penney, and K-Mart were always having sales on men’s underwear. Often the photo was just five boxers in a package, but if you were lucky maybe they’d show an empty pair of briefs floating against the background. Then there were those times, those lucky Sundays, when if you’d hunt long enough you’d find a photo of an actual man in underwear. Maybe he’d have a towel around his neck like he was about to take a shower or a mug in his hand like he was just waking up in his nylon store-brand bikinis that came in a five color assortment. He was always staring off in the distance confidently, masculine, yet sexually inert.

I began to imagine stories behind these images. Did the model feel silly stripping down in front of the camera crew? Does he normally wear nothing but striped briefs the house? Did they let him keep the underwear, and did he put them on for his girlfriend later that night? Why couldn’t he be holding a beer and winking at the camera? Why wasn’t he sitting at the edge of a bed, leaning back on his arms, face downcast, vulnerable, yet offering himself to the viewer’s gaze?

I had developed a thing for underwear. I had grown up wearing Hanes and Fruit of the Loom tightie whities. In my adolescent mind it was something no one else saw, so why would you go out and buy special ones? Like those ones that were tomato red and barely covered your hips and probably showed the outline of your penis and probably felt so light and yet so snug…

When I went off to college I began buying underwear for myself. It was always a nice little charge of energy when I put one of my special pairs on. This felt right. Over the years I’ve tried more and more kinds and brands and cuts and I still can’t wait to get home and open a new package. Recently I decided to put my love of underwear out there a bit more (in an anonymous internet kind of way) and embrace what I’ve spent years thinking about. My collection continues to grow and I love hearing other guys talk about underwear.

Underwear, to me, signifies a man’s assertion that he is a sexual being. A guy may be a mild-mannered desk jockey, but those leopard print jockeys under his pants tell otherwise. They mean that he tries harder than ratty boxers with the elastic worn out. They mean he thinks about what it’s like to undress in front of someone, to invite someone to look and to touch. It means that he opened up his drawer this morning and thought, “I want to feel sexy today”. He headed out the door with that little extra charge of energy in his step. And that’s what I love about underwear. Let’s get into this.