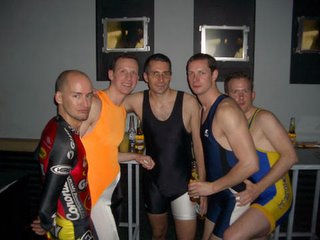 Guys at SkinTight hanging out

Ok, I left you hanging yesterday, and here it is. SkinTight parties are the ones in NYC where guys get together at a bar and wear their spandex (biking, superhero, wrestling singlets, leather, latex and Under Armour, and much, much more). They can dance and drink and make a night of it. I think it’s kind of like a celebration of your fetish. I don’t know who thought up the idea but a guy named Droo, (yes I spelled it right), has become the spandex prince of NYC. He is the organizer and host from what I can tell of the parties. 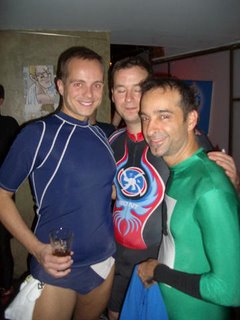 More Guys at SkinTight hanging out, I love the guy in the speedo!

I have seen Droos pics online for a while and chatted with him on AIM. He seems like a great guy. He’s big time into gear so you know he scores points with me! The parties have been at some other bars and have moved to the current one. At this one, it’s preferred if you wear some type of skin tight clothing, but it’s not necessary to get into the event. There is an area for people to change so they don’t have to walk the streets of NYC dressed as a college wrestler, or as Spiderman. You can wear anything from an Under Armour shirt with jeans, or a latex catsuit. Mostly it’s some type of lycra gear. Which I think is cool, because from what I understand about the last parties, they were in an open bar, and I know if I were going I’d stay home, to have the regular queens be bitchy about the gear and really tear into people (Make fun of them)* I’m of the school, if you’re having fun and not hurting anyone, there’s no reason for someone to make fun of them. That’s just me though, & although I don’t always live up to it, you never intentionally hurt someones feelings. I know there are tons of fetishes out there, some of which I don’t quite understand, but as long as you’re consenting adults, knock yourself out. Ok, off the soap box and back to reality. 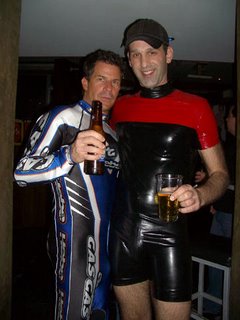 Not sure what the guy on the left is wearing, either a skin suit or looks like a BMX suit, either way it’s HOT

If I remember correctly the parties started as HardComixxx, with kind of superhero theme. Guys would dress up in superhero costumes, (spandex and the like), and get together. Now that is very hot! As a kid, who didn’t want to strip Aquaman or Robin and have their way with them? As you notice they always drew the guys with big bulges. I guess the gay guys in the comic book world drew the men they way they wanted, and the str8 guys in the comic book world drew women with large breasts. Like most guys though I don’t have a superhero costume and couldn’t wear one that often. So I think the move to all things spandex really gets more guys involved. Rather then spending big money, (some of the Superman costumes I’ve seen have been over $400, & Droo told me about Spiderman suits upwards of $1,500.00!), you can wear something you already own and just go hang out.

Gear guy supreme Droo, in front in the red/black skinsuit

As you can see by some of the pics there are some guys who like to wear superhero costumes, and there are others who just wear spandex. I think it’s a cool mix. You see guys hanging out, dancing and drinking beer. Now that’s my kind of night. And btw, Droo said it was cool to post the pics. I wanted to make sure before I did. I think it’s really cool that guys in NYC are really embracing their fetish. There have been guys who have come all the way from Greece, Europe, China, Australia, and from points all over the USA. I really want to go up and go to one. As you can see by the pics the guys aren’t all super muscle studs, most are just average guys and to me that’s perfect. I think the parties are awesome. 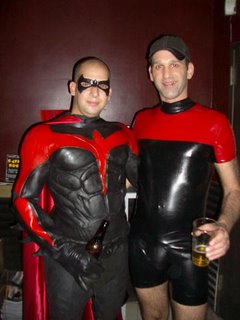 You can keep up to date with party information at the following internet addresses: