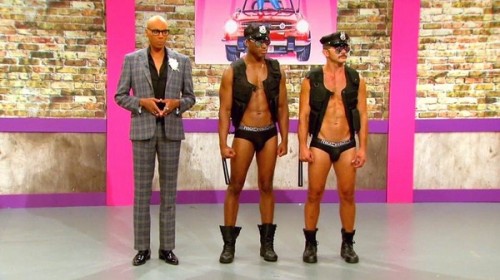 As RuPual’s Drag Race is going main stream. Meaning there are more and more straight people watching the show and talking about it at the water cooler the next day. Our very own T, got a chance to interview one of the Pit Crew this year. He spoke with Shawn Morales and here is the interview.

T: Hey Shawn, thank you again, for agreeing to be interviewed for UNB.
For those who don’t recognize the face (or the smokin’ body), Shawn is currently a member of the Pit Crew (the hunky men in skimpy underwear assisting            RuPaul and the queens) on RuPaul’s Drag Race. Could you tell me a little about your life leading up to your Drag Race fame?

SHAWN: Well before Drag Race I worked in outdoor advertising for a few years at Charter Entertainment and then Show Media as an account executive and real estate manager while living on the westside. After I found my way into gogo dancing and one of my good friends Cody Bayne said “you should go in for RuPauls Drag Race Pit Crew auditions…todays the last day and you fit exactly what they are looking for (latin and over 6 feet tall)”. So I did and the guy now friend Frank Meli who held the audition said he was 99% sure I had got the job.

T: Did RuPaul herself hand-pick you?
SHAWN: I’m not sure…never asked. I hope so.

T: I know you said you’ve done Go-go work in the past, did you have any hesitation taking it to the world-wide audience? 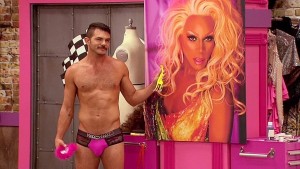 SHAWN: No not at all…I already had to my family, all my friends and on Facebook.

T: You spend all your time on screen in underwear. Could you name some pros and cons to your job?

SHAWN: Pro I get paid to hang out with cool, amazingly, talented people in my underwear as a “hot guy”…and get paid for it. It’s kinda amazing!

T: Do you get to keep the underwear from the show? Your personal collection must be quite rich…

SHAWN: Most of them…but not all. I made goods friends with Marco Morante of MARCO MARCO Underwear. So yes…I do.

T: When you are not in Pit Crew mode, do you have a lot of preference over your underwear, or is it more of a utilitarian thing for you?

SHAWN: Totally utilitarian but I love my MARCO MARCO Underwear 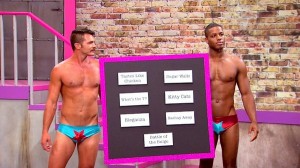 T: What style/cut underwear do you enjoy most?

SHAWN: It all depends on the season…but here in Los Angeles mostly briefs.

T: Ok, here’s some scenarios: you’re going out to the clubs with your friends, just to have a good time…you open your underwear drawer and chose your…?

T: How ‘bout, you’re boyfriend has been away for a week long trip, you want to surprise him when he gets back home, you await him in just a pair of …?

SHAWN: Sweats, basketball shorts or some sort of short shorts?

T: Awesome, Shawn! Thank you so much for your time. I always cheer for you when the Pit Crew gets brought out. Have a great day!

SHAWN: No Thank You T Lawrence-Simon