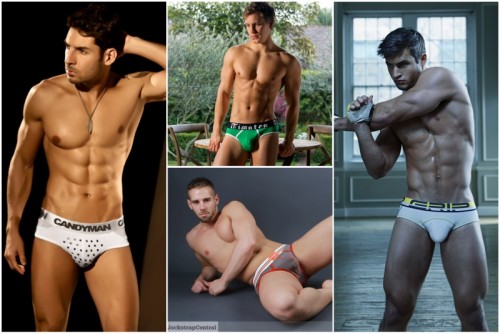 In our second brief talk Brandon and myself decided to tackle the sizing issues in men’s underwear. We all have been there when we bought a brand and its quite what the sizing guide said it was! Enjoy the talk

Brandon: Brandon: When it comes to buying designer underwear, the decked is stacked against you in terms of picking the right size for you, because most designer underwear shopping is done online, and thus you can’t try it on. My experiences in this regard have proven that there is a profound difference between American sizing, European or British sizing and the sizing coming from the Latin/Central/South American brands. American brands stick to waist size, but what that actually means is they stick close to American pant sizing. I’ve found that the bigger name an American brand is, their size chart is typically forgiving, and you should order whatever size that contains your jeans waist number, unless you like roomier fitting underwear, I guess. I have a 36″ waist according to American sizing so I am usually in the L or XL size. Once you hit 36 on any non-American brand though, you tend to have to buy the XL and pray it fits ok. For the most part I can fit into any foreign brand’s (that isn’t a household name like Armani) XL offerings. It can be frustrating, but the only way to figure it out is to “buy and try.”

I know we are working on revamping our sizing guide here in the next couple of weeks, and really UNB is the only site out there that remotely covers a majority of the brands. With that I hope we can provide the details men will need when thinking about buying X size from Y brand.

Brandon: I know you and I are bigger guys, and obviously that provides other challenges for us when it comes to sizing in men’s underwear. Knowing that there are plenty of brands that run really small (in comparison to American brands) do you think that might be a product of who they are made for, or is there an underlying filter there, like maybe certain brands want to prohibit men they perceive as out of shape from wearing their stuff?

Tim: This is a great question. Before I started the blog and I would often wonder this exact question. But after getting to know a lot of the brands around the world I have come to learn the different sizing around the world. Here are some great rules to follow when buying underwear from outside the US and note that these are generalizations and always check the size guides for each brand.

I focused on XL because i wanted to show how different the top end of the size range could be in each country can be. In the US for most brands it is listed anywhere from 38-42 inches. This just illustrates how sizes vary wildly over the world. But I can’t stress enough to read the size chart for every brand you buy. Granted they aren’t always accurate. We will be working on the UNB Size guide to redo it an add in more brands to help pick better underwear.

The second part of your question is are brands making underwear that maybe doing the “Abercrombie’ing” of underwear. I don’t think that many brands purposefully do this tactic. The sizing for most of the areas listed above are set to the size of guys in their population. As we have seen the backlash with Abercrombie I think the same would happen in the world of underwear. I can think of only a handful of brands that don’t offer XL underwear. This would shut out more athletic guys and beefy guys. More companies know that guys of all sizes want great undies.

Tim: Would you buy underwear from a company that would use the Abercrombe’ing of underwear? Even if you could fit in them and size wasn’t an issue?

Brandon: I would never buy underwear from a company that wasn’t committed to making their products for everyone to wear. I struggle with body image (perhaps more since I got into men’s underwear) so when a particular brand’s XL doesn’t fit me, I know I get down on myself. Like you said, I don’t think we probably have to worry about any underwear brands doing this simply because they couldn’t afford to lose consistent customers with an industry that is completely saturated with new brands, and new designs from the old brands.

Brandon: We both agree that a brand trying to purposefully prohibit certain sized men from wearing their underwear is a bad idea, but isn’t their something to be said about brand superiority? I mean I know I feel “under-dressed” when I put on a pair of well-worn Calvin trunks to do yard work, or when I clean the house. I will even bypass certain pairs of underwear that have made it to the top of their piles in my drawer for a pair from a brand I view as far more superior. Do you have brands that you place “above” others even though we’re talking about high quality designer brands in general?

Tim: Yeah I do the same thing. I have probably 400 pairs. I regularly pass over pairs at the top of the drawer when I see a pair that I love below it. Granted most of the pairs in the drawer cost over $20 a pair. We share the same love of pouch briefs and underwear with extra room up front. One of my favorite brands is Cocksox. Anytime I see a pair of Cocksox I regularly grab it rather then what’s on top. There are several other brands that I just grab. But usually these pairs never make it in the drawer. I keep them in a clothes basket and routinely wear the same pairs. Granted I have gained many pairs of underwear from doing UNB the last five years. There have been very few I don’t like. Most will garner a place in the underwear drawer and be worn again.

Tim: What to you puts a brand above others in your underwear drawer? What are the few factors that make you love a pair of underwear?

Brandon: Well, I think it all boils down to whatever your favorites are, and to a lesser extent on how you sort your undies. I sort by brand, so I never really have brand conflict in terms of the “stacks” that I see. So usually it’s a specific pair that I might “reach” for when it isn’t no top, rather than the brand. I love the “Anatomically Correct” pouch from Andrew Christian and AC is easily my favorite brand, so when the undies at or near the tops of the other stacks aren’t too appealing on any given morning, I default to one of my two main AC stacks. When it comes to the factors that makes me love a specific pair over some of the others, I think I have to go with a combination of three elements. The comfort, the look, and then maybe the sentimental value. I will always default to a “trusty” pair of briefs when a brief I might not be feeling on any given day pops up to the top of its pile.

Brandon: Speaking of trusty pairs of underwear, in a collection of 400 pairs, I am sure you have plenty of those. How do you cycle through your underwear in an attempt to even out the wear cycles of all those pairs?

Tim: Funny you should ask, I’m about to go through all my undies. As you know this past year I have lost weight. I went from a 42-inch waist and now down to a 36 waist. So the cycling is a bit more difficult then with having all the same sizes. A lot of my favorites are way too big on me now. Which makes me upset that I can’t wear them. And it’s one of those things where you don’t want to get rid of your favorites. I have pairs from about 8 years ago, like my first pair of unico that I refuse to get rid of. They are basically worn out but what do you do with old underwear. One of the best suggestions I have ever heard was make a quilt out of them. it would be an awesome way to keep the undies. But I don’t sew! So I am in the process of organizing my drawers. A lot of the most recent pairs I have reviewed on UNB are in the main underwear drawer. They fit and feel great. I am also having to as you said in one of your articles “rediscover” underwear that now fits again. It’s like finding hidden treasure to me. i have a big bag of size large underwear I get to go back through. Then there times when i open one of my other four drawers of underwear and find pairs I haven’t worn in a while. I really need to organize them better. That is the biggest challenge to me and finding underwear. Right now the way I organize underwear is the top drawer is my favorites, the second drawer are ones I like but either the color is not my fav, the fit is just ok, or they are the second tier undies. The Third and fourth are pairs that are just ok. I have to figure out what to do with underwear that isn’t my favorite. I just feel wrong about throwing them away. Another think I like to do to cycle through undies is have a theme week. For instance I’ll do a jock week, a Green week, or something a long that lines. Just to mix things up. It would be interesting to hear what our readers to do rotate underwear.

We will have more of this chat soon. We also will have one from two other guys on the site about performing and underwear. If you have any questions feel free to reach both of us on twitter at @unbtim and @unbbrandon. Also you can always email us at info@underwearnewsbriefs.com