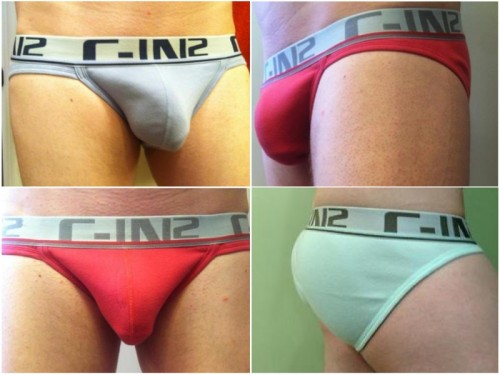 When you have as much underwear as I do, it is difficult to come up with the one pair that you’d place above all the others, but I think the underwear a man wears can really offer a window into who he is as a person. Of course, I have several favorites when it comes to underwear, but there is one that stands out to me every time I get them on.

My first pair of briefs were the long-since discontinued Neon Sport Brief from 2xist. Not too long after that collection sold out, 2xist started to venture away from their sport brief style altogether. But as they were phasing it out, C-IN2 added a sport brief to all of their new lines, and it looked strikingly similar to 2xist’s design (probably not a surprise as C-IN2 was founded by former 2xist founder Gregory Sovell) but it was a much better pair overall.

The reason I’m still falling in love with the C-IN2 Sport Brief is that it seems as if it were designed with my body type in mind. Being well-endowed, the most important thing to me about a pair of underwear is how well the pouch can contain my boys while offering them a good level of support. The pouch on the C-IN2 Sport Brief is deeply contoured as a result of the briefs design, which mimics the extremely high-cut leg openings of a jockstrap. Like most well-endowed guys, I’ve mostly defaulted to underwear brands that utilize an “Anatomical Pouch” but the reason I chose this pair over any of the dozens of pairs with an anatomical pouch is the quality in construction of these briefs. The cotton is incredibly soft, and it’s also thick, but breathable. The elastic used to frame the brief is incredibly sturdy, which provides support that no pair of anatomical briefs could dream of doing, but it also frames an athletic bubble butt like mine perfectly.

C-IN2 is a member of what I call the “Big Three” in designer underwear. They are here to stay and thankfully, so is their Sport Brief.