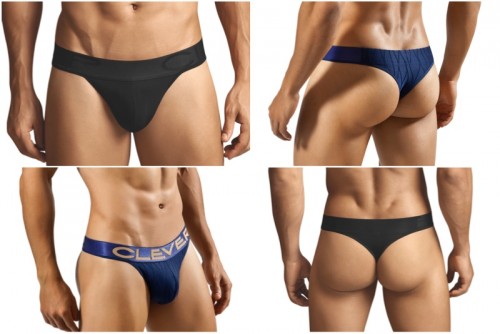 So let me flashback about two months to properly tell this story. It was during a cold winter day when I texted @UNBTim to talk site matters when we began talking about other underwear topics. I then told him something which may have surprised him: I had never worn a male thong. I had looked at many and considered it, but just could never bite the bullet or pull the trigger or any other description you prefer to use. I wasn’t happy that I never tried one as I felt I may be missing out on something as a guy that appreciates all things quality underwear. Tim wanted this to change so at the time he made a commitment to eventually send me a quality thong to properly break me in. Excited to hear this, I thanked him and awaited its arrival.

Flash forward to last week and the thong finally arrived in my mailbox. Once I returned to my apartment I surged to my room and began to put it on. I was excited to see how it felt. What would fabric between my cheeks feel like? Would it be too tight? Just right? Many questions were about to be answered. First impressions weren’t too bad. The pair is a Clever Mesh Silver Thong sized small. It is very sleek, but not to the point of being simply a stripper banana hammock. It is modern and I appreciate its look. I began to move about in these undies to see its functionality. Would I like walking around with fabric riding along my butt? I found that while I didn’t hate it, I wasn’t an overwhelming fan. It was a tad too constrictive for my liking. As I wore the pair throughout the day it did begin to loosen a bit, but it still was not to my optimal liking. It was almost as if the thong was changing my posture. Now this actually wasn’t a bad thing, but it was certainly unexpected.

I continued to explore how this thong felt as I made my trek to class. Full disclosure: Walking in a thong is a dream, but you feel naked while doing it, even if you’re wearing jeans. I’m sure many know this, but I certainly didn’t. Granted no one can see through my clothes, but I felt it in my mind. Sitting in class wasn’t too bad in terms of it riding up my butt as I feared. To a point it did, but it was certainly tolerable and once class was finished I was able to re-adjust myself and continue my day. Next stop? The gym! It was back day. I started with cardio, pedaling away on the stationary bike. Here I wasn’t necessarily fond of having a thong around my waist since it was riding up a storm. Would it perform better throughout the rest of the workout? Well, this answer is twofold. While it did give me great range of motion throughout activities, it just rode up my butt way too much. Therefore, I don’t think thongs are great gym underwear.

All in all, this wasn’t an awful experience. Thongs are different to say the least, though not necessarily in a bad way.. For tasks where you need to be on your feet moving or sitting idly in a desk chair, I think this style will suit me well going forward. You will not catch me in the gym with a thong underneath my shorts ever again though. There is simply too much discomfort for my tastes but at least I know this now. Loving underwear is all about experiences, whether good, bad, or a mix of both. This one falls in the third category, but I still will wear this thong again and maybe even another goi