AussieBum has a great new line, but only for a limited time. The new Graduate Line is only out for a limited time and only while supplies last. So unless you move fast you won’t get them. AussieBum is always doing something new and exciting, so if you don’t get this line, check out some of the other great undies they have! 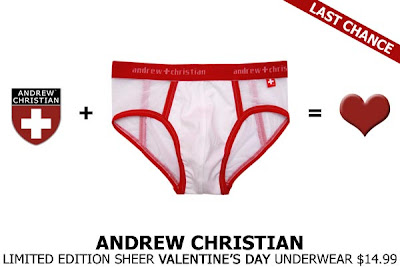 Andrew Christian is producing more limited edition underwear. They are being sold at the price of $9.99 and no more then 50 will be sold. A blue pair will be produced but will not produce more then 158 pairs. If you want these undies head over now and get them! Note these will NOT be sold in stores, only on the Andrew Christian Website

Here is what the Press Release says:

The first underwear in the series is the special Color Block Brief in Red, White and Blue for a mere price of $9.99! There were only 50 made in this color combination, and this item has already sold out within a week of release.

The third style is the Tri-Color Block Boxer. Only 158 of Lt Blue will be made and are also selling for only $9.99 exclusively at AndrewChristian.com..

“After many successful years with Andrew Christian, I wanted to begin making something as a thank you to my diehard and loyal friends,” says fashion designer Andrew Christian, “therefore I decided to begin to make a line of “limited edition” underwear that only those who check the website often would be abreast on. We won’t announce when the next style comes out, you will just have to find it by checking out the website.”

Hurry they are going fast. Check back often for other limited edition undies, they won’t announce them to the public but will appear on the site! I just checked and the Lt. Blue Boxers are just in small. Keep checking daily for new limited items and order early!