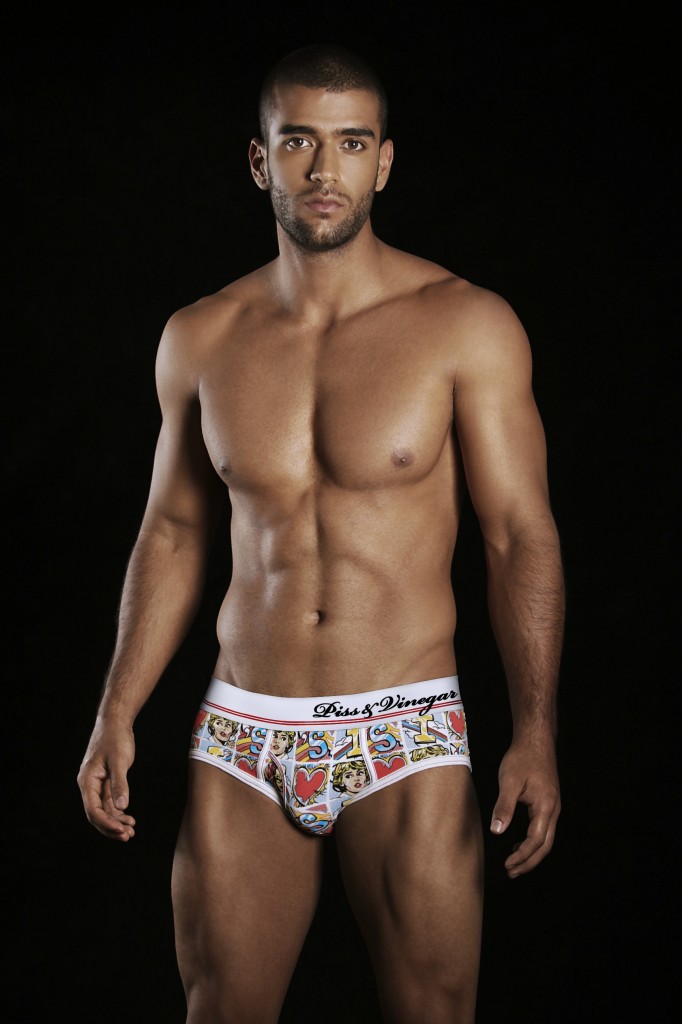 UNB has again sent me a new brand of undies to add to my ever expanding collection.  Piss & Vinegar is a brand that, just by its name, is intriguing and according to my boyfriend, fits my personality well.

Piss and Vinegar is actually British slang for “living young at heart”, and made its debut at The Las Vegas Pool Tradeshow at the end of last summer.  Jason Sutherland, designer and creator behind Piss and Vinegar and also the former president of Ginch Gonch, has brought the playfulness of Ginch Gonch to the more grown up arena.  Piss and Vinegar is designed for the guy that doesn’t want to fit into the traditional cultural and conditioned stereotypes.  Piss and Vinegar’s underwear is made of 96% Pima, a very soft and comfortable cotton, and 4% Lycra to give it just enough stretch to mold to and move with your body.  All of their underwear comes with a 1.25 inch microfiber elastic logo waistband.

I received the ”I Love Girls” Cartoon Brief in size 32 (M) to review.  This is one style that is available from the Piss and Vinegar’s “I Love…” Collection, also available with themes like the controversial “I love Jesus” and “I love Buddha” briefs as well as “I love Boys”, “I love Girls” and a few other eye catching styles.  The entire collection comes in briefs, boxer briefs, low rise briefs, and jock straps. I slipped these on right after receiving them, like I do whenever I get undies to review.  The first thing I noticed was that the fabric is very soft and the pattern was fun and colorful.  There was plenty of coverage in the back, but that wasn’t the case in the front.  I thought they could have added a little more fabric to the pouch area, as it felt a little cramped.  I took them off and put them aside to wear the next day… ALL DAY, as that would be the true test.

When I wore them for an extended period of time, I found that the cramped feeling I got in the pouch area wasn’t as noticeable and I didn’t seem to mind it much.  They stayed with me all day and didn’t ride up at all.  I did have a little bunching in the rear towards the end of the day but nothing that would stop me from wearing them again and again.  I also decided to take them one step further and wear them during my cardio workout that night.  They held up really well and even with a little sweat, they did great.  They didn’t offer a lot of support in the front when I was exercising, but I don’t think Piss and Vinegar had that in mind when they designed these.