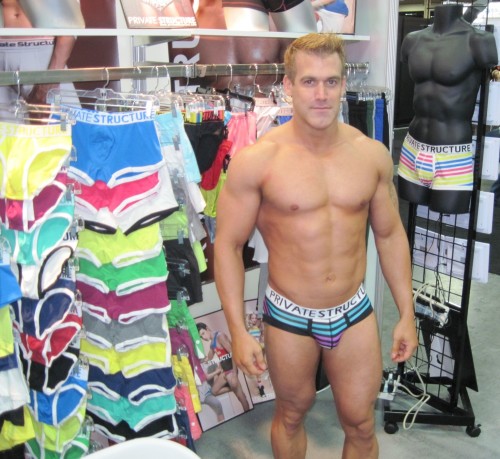 As an”expert” I am always thrilled to find articles in prominent men’s magazines that discuss the ever growing trend of bringing more men into designer underwear. So when I read in a recent edition of GQ about the “Return of Tighty Whities” I was glad to see men’s designer underwear getting some mainstream exposure. On the flip side though, as someone who is ever present in the world of men’s designer underwear. I already knew this, and in fact what is only recent news to GQ readers has been going on for a couple years now; briefs are back, and they are back in a big way.

So what are the reasons for this trend “back” to the brief?

I think this “return” of the brief can largely be attributed to what I think is one of the best fashion trends in history, which is the concept of men wearing pants that fit them. Of course I am referring to our departure away from relaxed fit, boot cut jeans and slacks and our evolution back to straight legged, “slim fit” slacks and “skinny jeans.” As this trend achieved mainstream, market-wide saturation, we “18-35ers” quickly had a problem on our hands. As our “work khakis” and “going out jeans” started to comfortably grip our thighs, wearing boxer shorts became an absolute nightmare. Trying to keep them smooth as you slid into your well-fitting pants was a hassle most of us grew sick of.  And while our first inclination was to go to boxer briefs, they stretched out within a half hour, and their high rise left a good two inches of the waistband area exposed by our new, lower-rise pants.

Of course, the only option we had left were briefs, the underwear we’d grown to make fun of.  But as the market became saturated with the new trend in men’s pants, more men began to gravitate back to briefs more out of necessity rather than desire. Thankfully though, the most prominent names in men’s underwear design quickly recognized that men weren’t coming back to briefs by choice, so they immediately began re-designing the brief we once knew into something we’d be more comfortable wearing. And what they created was something that should have come a long time ago.

If you placed briefs from the country’s top ten underwear designers on a table today, you will notice two things. First, you’ll notice that the front of the brief actually has a shape, and as it moves to the low-rise waistband, you’ll also notice leg openings meant to contour to your body. These two simple design changes have done wonders for “The Brief” over the course of the last three years. Not only are they made specifically to fit comfortably under your skinny jeans, they are made with the contours and movement of your body in mind making them conceptually, the opposite of what we always thought the brief was about.

Essentially, we can see that “The Return of The Brief” to prominence was one that was dictated by an outside actor-in an emerging fashion trend, rather than some spontaneous, nostalgic desire to return to tighty whities. But I don’t think the emergence of a modern take on “ye ol’ standby” is entirely born out of necessity. I think the brief’s return to prominence can just as largely be attributed to the positive reaction of those trying the new take on the old classic.

Prior to the “necessity factor” and the response from underwear designers to turn begrudging acceptance into something resembling desire for briefs that followed, there wasn’t an underwear design available that does what this modern brief does. It took these new briefs (and to a lesser extent, “trunks”) to get men into underwear that was contoured specifically for their anatomy which offered support they had never gotten in their boxer shorts and boxer briefs. As more and more men make the switch to briefs, the more they realize how underwear is supposed to fit. Such a positive is only trumped by the fact that more and more women seem to be purchasing them for their men. And as someone who made the switch in 2009, I can tell you that my wife prefers me in a brief than even my smallest trunks.

While you can argue that the brief never went away, the concept of the brief went dormant for all of us once we hit adolescence. And as our generation (as well as some of our fathers’) moved decidedly into boxers and boxer briefs, the brief was conceptually-in terms of design, in hibernation. But, as recessions are prone to do, the 2007-08 recession brought us a new take on an old fashion trend, and that required all of us to rethink the underwear we had grown to accept as standard fare. It produced the return of the brief from hibernation, and with a new, modern take with our anatomy and bodies in mind, the brief has returned to dominance.

Today you can buy a brief in any cut and any color in a variety of different “cuts.” As the brief continues to increase in popularity, more designers enter the market offering up their own interpretations on the modern brief. And if you’re unconvinced that the brief has truly come full circle, go to the designer underwear section of your local department store and compare the amount of briefs you have to choose from to the amount of boxer shorts available to you.

The brief is back and I can promise you that you don’t have a good excuse not pick up a couple of pairs and see why they’ve re-emerged as the best underwear for men.