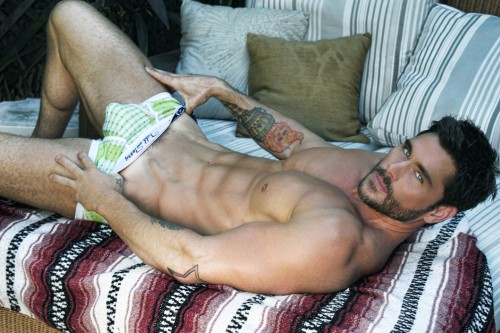 I had the privilege of sitting down and talking with successful model and HIV activist Jack Mackenroth on his past modeling days and his desire to be a voice and support system for those in the community.

Jack:  My first modeling job was in a gay magazine that is no longer in print called Genre. I think it was about 1989. 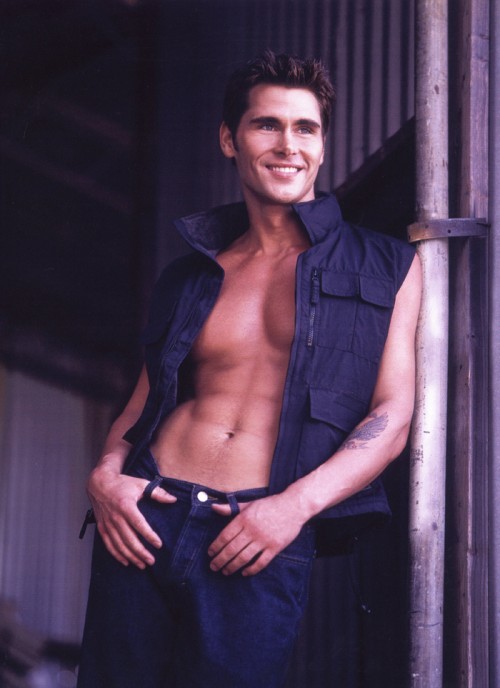 The photos are horrifying to me now. HA! I also did a series of book covers for a line of pre-teen books called The Sunset Series. I believe my character’s name was Kyle. Hilarious.

Kyle:  I think that is a sign for us speaking today!  Great name!  Did you always want to pursue modeling?

Jack:  I was going to fashion design school at Parsons in New York and people kept telling me I should try modeling. I never really “wanted” to do it. I just needed the money. In the beginning I just went to all the agencies in New York for their open calls which they used to have once a week. I did that until I got signed. I think the business was a lot different then. This was back in the early 90’s.

Kyle:  I think once we are encouraged on so much we start to take that path as you did.  Thinking back, what was that breakthrough moment that happened for you when you thought this was all truly real?

Jack:  I never really had a breakthrough. I had some degree of success. I spent a season in Milan and did some work for Versace. I did a lot of catalog work which is what really pays the bills. I got much more attention after being on Project Runway Season 4. But by then I was already 38 years old. And I had been lifting weights for a long time. There is a huge difference in the industry between “fashion” models and “fitness” models. Fashion models are usually between 18 and 25 and they are super tall and thin–at least 6 feet. You have to fit the sample sizes which is typically a 30 waist and a 40 regular jacket. I’m now a 52 chest and even back then when I weighed 160 pounds I was too broad from swimming. 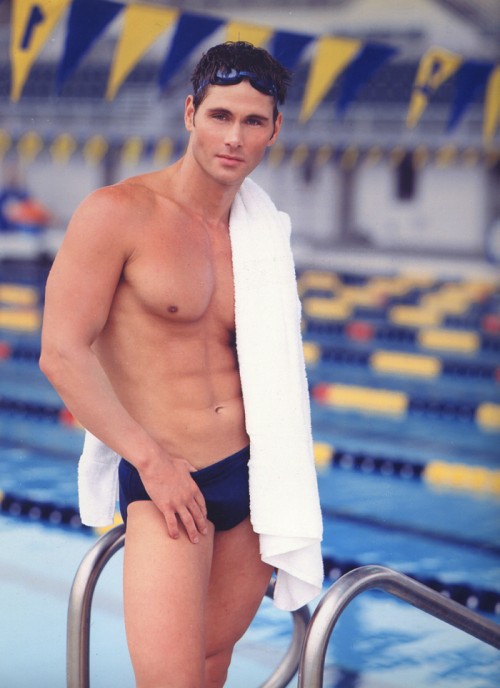 I never made much of an impact as a fashion model. Just a few jobs here and there to pay the bills. After my exposure on Project Runway I had photographers hitting me up all the time to do photo shoots. You can see the progression of my career in my photos as I get older and more muscular and then anything in the last 4-5 years I have had a beard or at least some scruff.

Kyle:  In social media I see a lot of different people who distinguish themselves as “fashion” or “fitness” models so it is nice to get some perspective on that.  Sounds like Project Runway gave you some great exposure as well.  Do you have any favorite photo shoots you want to tell us about?

Jack:  Hmmmmmm. I had a great time with Justin Monroe. I’ve shot with him a couple of times. He’s fun and the shoots are sexy and a little bit slutty and he’s always well prepared with a good set and concept. I don’t think that people realize that modeling isn’t really much fun most of the time. You’re in the same awkward position for a long time and usually there is not much budget so you don’t get many perks. It’s not like in the 90’s when we had location vans and food and full wardrobe, make-up and hair teams. That’s only high end editorial now for the most part.

Kyle:  Not the glamorous lifestyle and perks that people perceive.  I am sure many people don’t know how hard the work for a model is and how difficult on set can truly be.  Besides holding awkward poses, what challenging photo shoots have you had?

Jack:  I’ve worked with photographers that basically just want to get you naked and are so overtly sexual that it 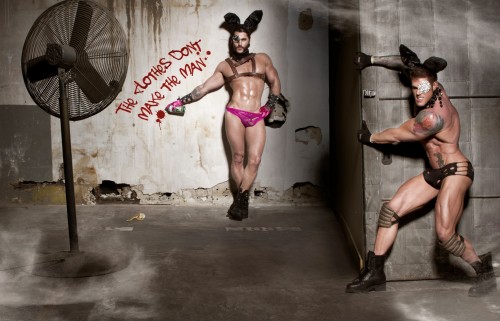 becomes uncomfortable. I won’t name names but some of the well known photographers are notorious for unsolicited groping and fluffing. I’m no prude but that can be annoying. I’ve been in shoots where I’m literally freezing but I have to look warm like I’m having the time of my life. Many freezing swimming pools. I remember being chased off of property because we didn’t have permits–crazy stuff like that.

Kyle:  I am sure those situations turn you off from wanting to continue.  I can only imagine standing in cold water and acting like you don’t want to scream and be wrapped in a blanket!  There are always some so how about most embarrassing photo shoot situation?

Kyle:  Haha to the point!  I am sure that happens frequently and can halt some things.  You have a great muscular build.  What kind of diet and exercise do you do to prepare for shoots?

Jack:  Nothing special. I used to have to starve myself when I was trying to fit into samples. I did the Atkins no carb diet for 2 straight years, So gross. Now I don’t care too much. Photoshop didn’t exist when I started modeling but now they can fix your abs and do pretty much anything. I’m a competitive swimmer so I’m always in pretty good shape because I swim 4-5 times a week in addition to lifting weights. I eat like a pig for the most part.

Kyle:  Swimming is a great workout though plus we appreciate the speedos!  Besides speedos which I am sure you have for swimming, what is your underwear collection made up of? % boxer briefs, % briefs, % jocks, % thongs. 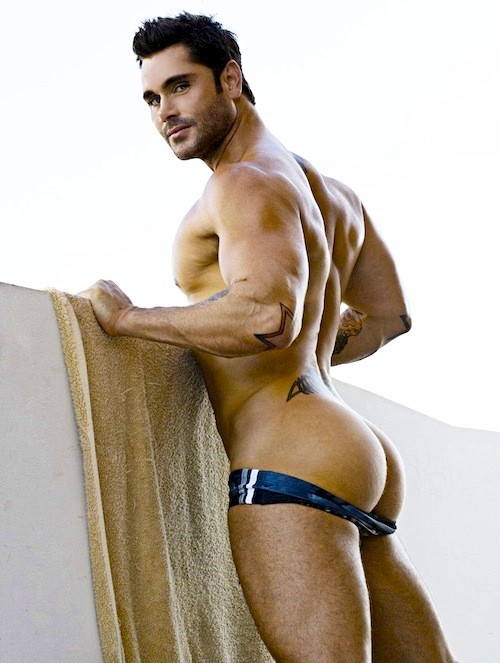 Kyle:  Yes, I am a fan of you showing off the assets as well!  Notice the collection of jockstrap pics in our gallery of you!  So most of us don’t know the real you, only what we see in pictures.  What is something that your fans don’t know about you outside of modeling that you want them to know?

Jack:  They can always reach out to me on social media with questions (@jackmackenroth). Twitter is the best outlet. I always answer back when it’s about HIV issues. I tend not to respond to “You’re hot.” or “Tell me your workout routine.”

Kyle:  I love that you have put yourself out there to support others.  That is exceptional and admirable.  Where do your goals go after you feel that your modeling career is shifting from not being in front of the camera as much?

Jack:  Well I considered my modeling career to be over a long time ago. I’m actually surprised it lasted as long as it did. I’m 46 now. I’m always surprised when someone still wants to photograph me. Now I’m a full time HIV activist and advocate. I was just hired as the Senior Communications Officer for The Global Forum on MSM and HIV (MSMGF.org). I’ve been HIV positive since I was 20 so it has always been an important cause to me. I’ve created several successful social media campaigns in the past like HIV Equal and The HIV Shower Selfie Campaign #weareALLclean. With MSMGF I will be working on advocacy on a more global scale.

Kyle:  Congratulations on those great endeavors.  Education and understanding are key on these important issues and you are doing your part helping others. Over the course of your modeling career, are there any regrets or things you wish you had done differently? 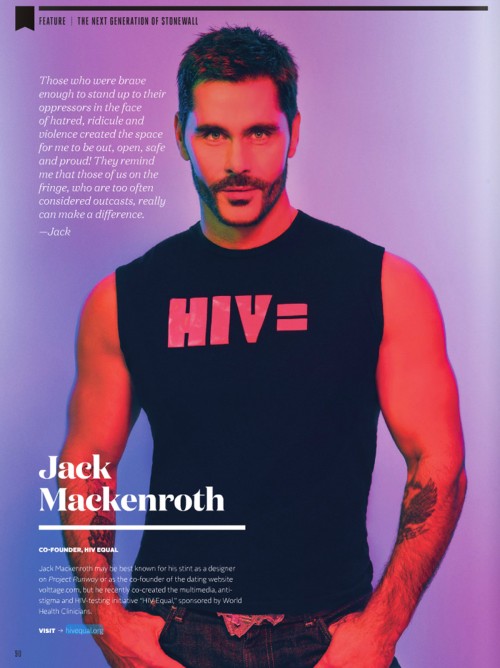 Jack:  I wish I was more secure when I was younger. The fashion industry is rough. I used to go on 8-10 castings a day and they would flip through my portfolio in 30 seconds and say, “No thanks.” That’s hard not to take personally. If I had been more confident I would have been more assertive and taken more chances. You have to realize that often they are just looking for a specific look. It’s not personal.

Kyle:  I can imagine that understanding comes with time and getting past the personal to professional views only comes with experience.  We can see how much you have grown into that.  What advice would you give to those looking to get into or newly involved in their modeling career?

Jack:  Do it for fun. You are not going to make a lot of money as a male model. EVER. Only the top male models make a decent living for a few years and that’s if they book huge campaigns. If you keep that attitude then you can be successful at some level. Learn to promote yourself. You can practically become famous on Instagram these days. This is the age of shameless self promotion so embrace it. And shoot a lot. It does take some practice to know what you are doing. There are just as many photographers out there who are trying to build their portfolios as well. Work with them.

Check out more of Jack Mackenroth below:

The Global Forum on MSM and HIV