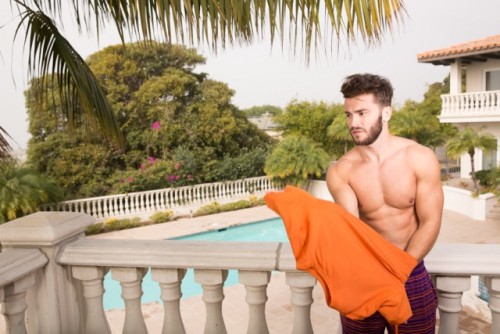 We spoke to Ajdin at the last Magic show and thought he would be a great addition to our model profile series which he was happy to do for us.  We love that his first gig was an underwear runway show, right up our alley.  He continues to share with us his special diet, desire to inspire, and Lady Gaga connection.

UNB Kyle:  I am glad that you spoke to UNB at Magic and joined us in this showcase.  Tell me how you got started in modeling?

Ajdin:  My first gig was walking in an underwear runway show. I got the gig through the agency that I was signed to

Kyle:  Starting off in our favorite department, underwear!  What made you want to pursue modeling?

Ajdin:  People at my gym would come up and tell me to try it but then a friend that was with an agency really suggested his agency multiple times. I thought that it would be really cool to try it but kept dragging it. Each time I saw him, we would talk about it and I would tell him that I’ve been wanting to but haven’t gotten a chance to go in yet since they only did open calls once a month. I finally got a chance to go in on the day that they had the open call and took digitals as well as filled out a form. They interviewed me and said they would e-mail me in two weeks. I ended up getting an email a few days later with a contract offer.

Kyle:  Sounds like your friend steered you in the right direction.  The agency clearly liked you because they snatched you up very quickly.  Since that first day, have you had a breakthrough moment yet?

Ajdin:  There’s a few shoots that got me some good exposure but one of the biggest ones had to be playing lead role for a Lady Gaga music video “G.U.Y.” Once the video came out, I was receiving all types of e-mails, Facebook, Instagram, Twitter, etc. messages from all types of people. A lot of interviews came in from all kinds of web portals, T.V. networks, radio stations, etc.

Kyle:  I don’t doubt you became a big name after that.  Part of such a big pop phenomenon will definitely give you so much exposure.  What have you done in your career so far that has been a favorite moment? 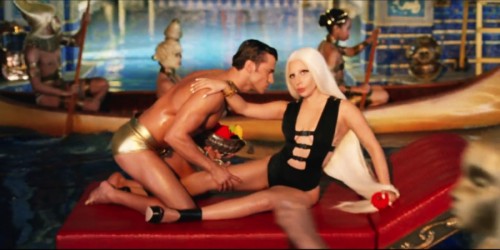 Ajdin:  I don’t know if it’s fair to pick only one so I will list my top 3. One would have to be when I was flown out to Montreal, Canada to be a lead role for an international commercial. I spent a whole week there filming as well as shooting some stills and I loved every moment of it. Another one would be a commercial where I got my racing license and was able to drive an Indy Car on my own at 158 mph. The final and probably my all-time favorite up to date has to be the Lady Gaga shoot because I got to work with her and her complete team. Since my role in the video was to seduce her and it was just me and her on a floatie, we got to know each other really good in between takes and during takes. We had normal conversations where she asked me my name, where I’m from, and other casual questions. 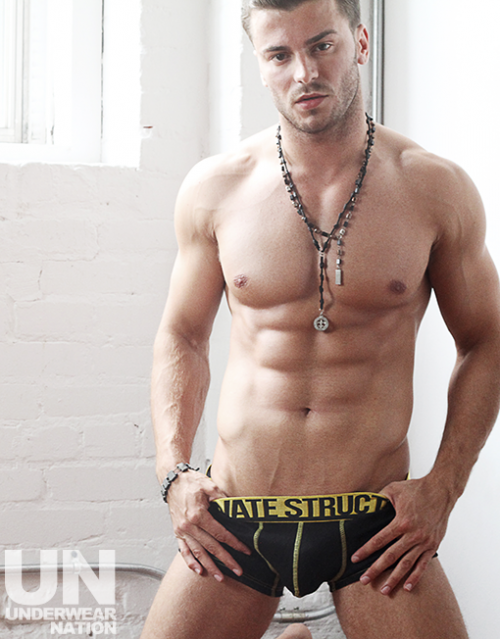 Kyle:  Great choices!  A little modeling and acting combined in 3 great experiences.  I’m sure the music video was quite an experience and something you would think would be out of this world but probably felt very intimate and comfortable just talking like two normal people.  What have you found challenging in your shoots?

Ajdin:  One of the most challenging ones was a stop motion shoot I did for an app that will soon be available. It was a shoot that took over 12 hours to do. It was all still shots that were put into a motion and made into a commercial. Took forever to do and was dragging but I had a blast doing it.

Kyle:  That does sound like a very tiring but rewarding day.  Can’t wait to see what app this is.  Now I feel like everyone should have one, what about an embarrassing moment?

Ajdin:  I don’t know if I would consider it embarrassing but it was definitely funny to me. I was fortunate enough to be booked as the face for Envy Menswear. We took a couple test shots in the beginning to make sure everything looks how it’s supposed to. As they were looking at the screen to see if everything was how they wanted it, I noticed them talking to one another about something. Couple minutes go by, and they come up to me saying “everything looks great but since we’re working with a black backdrop, the little hairs on your legs and arms are sticking out and it would take forever to remove each piece of hair for the final shots especially since we are shooting the complete line.” They ended up making a trip to the store to buy me shave necessities and after about 30 minutes or more in the bathroom, I walked out with shaven legs and arms along with quite a few cut marks since it was my first time ever completely shaving legs and arms. They also had two ladies shaving my gluteus maximus which was also a first for me.

Kyle:  Feeling like a new man that day, or at least a smoother man!  That was nice of you to take one for the team 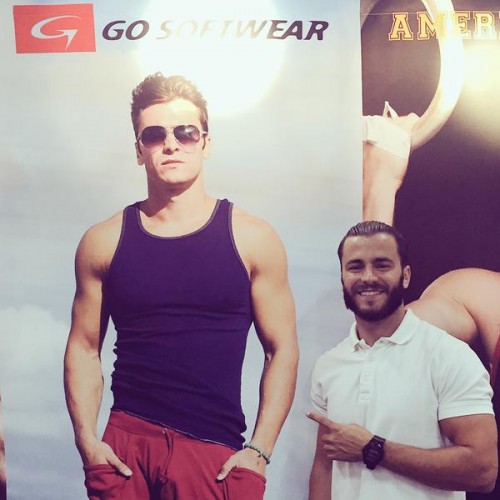 and do what needed to be done for the shoot.  Are there any brands or photographers you would like to work with that you have not worked with yet?

Ajdin:  I’m pretty sure that every fitness and underwear model will agree with me that the dream client to work with would be Calvin Klein, There’s a ton of other companies I would love to work with including Men’s Health, Nike, Adidas, Reebok and many more. We will see what happens.

Kyle:  I see you in those sporty mainstream lines.  Can’t wait for the dream to become a reality for you.  What is something that your fans don’t know about you outside of modeling that you want them to know?

Ajdin:  I was born and raised in Bosnia and Hercegovina, lived in Michigan for 15 years before moving to LA so my accent can be unique sometimes. Also, I tend to use my Snapchat quite a bit. I try to get a lot of behind the scenes at my shoots, gym updates, selfies, funny clips, and other random stuff that I see on the daily.

Kyle:  You just gave me an idea for a new post here on UNB.  We will have to talk about some of those behind the scenes and selfies!  Your body looks great!  What kind of diet and exercise do you do to prepare for shoots?

Ajdin:  I have a customized diet I created for myself and been using it for a couple years now. I eat my breakfast which is two parts, 4 of the prepared meals that I always have ready for me, and then for dinner I do a salad with either tuna or chopped up grilled chicken. I drink a gallon+ of water every single day. I slow down a lot couple days before and the day before and during shoot, I only drink when I absolutely have to.

Kyle:  Quite a routine you have there.  But clearly it pays off and you look incredible.  When you aren’t so strict on yourself, what is your favorite cheat meal?

Ajdin:  In N’ Out and Chipotle is a priority after my shoots. It’s tradition upon completion of my job 😉 When I am visiting Michigan, there’s quite a bit of cheat meals which are usually all Bosnian foods that my mom makes or that I get when we go out to eat.

Kyle:  I love that you have treat completion meals after a shoot.  Nice tradition to have.  What goes through your mind right before you have to do these revealing shoots?

Ajdin:  I have to make it the best shoot possible.

Kyle:  Well since you have been doing underwear since your first runway show you probably are very comfortable.  Speaking of underwear, what do you like outside of shoots?  % boxer briefs, % briefs, % jocks, % thongs. 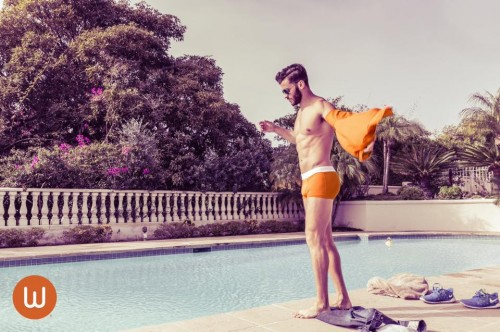 Kyle:  Pretty standard choices among many men.  What is the craziest pair of underwear you have ever worn?

Ajdin:  There’s been a few crazy ones but if the Borat one piece counts as underwear then that one is definitely the craziest I’ve ever worn and it was for a campaign I did.

Kyle:  Haha that iconic piece of underwear.  I am sure that was the one and only time you have worn that.  What are your goals for your career?

Ajdin:  I will continue to push myself to keep booking shoots whether they are print, commercial, music videos, etc. I’m always trying my best to push others and motivate them to chase their dreams because with hard work and dedication, anything is possible. It’s an amazing feeling when I get an e-mail or a message on social media from other people (a lot of times people I don’t even know) saying that I’ve been inspiring them and proving to them that anything is possible.

Kyle:  I love that you want to inspire people.  We get many comments on these profiles from aspiring models who appreciate the feedback that you share.  Finally, what is the best advice anyone gave you when you started your modeling career that you want to pass on to those reading this profile?

Ajdin:  The best advice that I get is from my mom and from the motivation quotes. I’ve been looking up and coming up with my own motivational quotes for a while now and it’s the first thing I turn to if I’m having a bad day or if I haven’t booked for a while.

Check out more of Ajdin Sefer below: