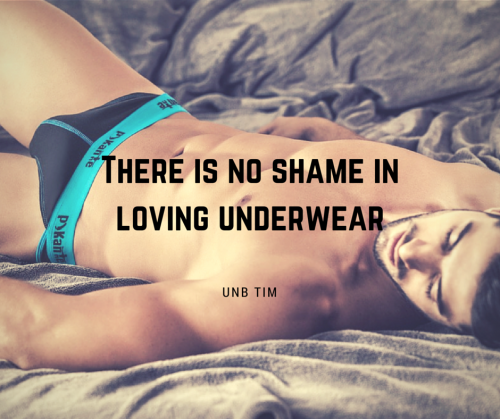 I have been running UNB for almost 7 years. It started as a way for me to share my love of undies with the world. Did I think It would catch on and become what it is today? Never in my wildest dreams. Even to this day I will meet people who love underwear and mention I run UNB and they tell me how much they love the site. This is awesome because believe it or not I still have times when I feel like I’m putting all this out there for me. I forget that there are thousands who read it.

Over the journey I have met gay, bi and straight guys. The love of underwear is universal and we all share a bond regardless of our sexuality. There also is a bit of shame with a love of underwear. I think it’s because underwear is so personal to us. Its exposing our deep down likes and passion. Revealing that is never easy. But in the whole scheme of things in the world of likes and fetishes underwear is pretty tame!

This is the other universal of underwear. Guys of all sexual orientations aren’t open about their love. Yes, some of us are open on Twitter and other social networks. Where we can be behind a screen name and remain mainly anonymous. In real life with our friends, lovers and significant others sometimes we hide the love. Why do we do that?

Is there shame in wearing underwear to make us feel great? Women don’t seem to have this problem. They have tons of different underwear from every day pairs to sexy lingerie. It’s a given that they will wear different kinds of underwear. Whereas guys are stuck with boxers or tighty whities. Why shouldn’t guys have the same options to wear amazing and sexy underwear?

So Why do guys have this need to hide their love of underwear? I have a few reasons after years of experience with this.

Guys don’t want to be judged – As I stated above underwear is personal and we choose who we share it with. Everyone who reads UNB has something different they love in underwear. This could be mesh, spandex, bikinis, colors/prints or more. Nothing worse than taking off your pants and have a person go “what are you wearing?’ and then laughing. There should be no shame in what we like.

Not Societally Accepted – For the longest time guys were to be wearing boxers. Everyone wore them and if you wore something different then you were strange. You often hear, “A real man wouldn’t be caught dead in a bikini/thong.” Like these is something wrong with either pair. Also guys don’t talk to other guys about underwear. It’s a taboo topic

Our Partners don’t get it or like it – I have a friend who loves underwear and thongs. But when he has dated the people he dates never get his underwear. So he changes his underwear and keeps that part hidden. Hiding a major part of you is never good for a relationship. So many of us do what he’s done and keep the underwear for personal time.  Rather than incorporation it with our partners.

These reasons are all guys regardless of sexual orientation. So what can we do about this? Well, we can’t cause a societal shift over night (as much as I would like). We can take small steps in that direction.

Find guys who share your love – This may sound like a DUH tip. But it really is empowering to have a friend who you can talk about underwear. It could be new stuff, favorites we have and trends happening. It also doesn’t have to be limited to the same sexual orientation. Some of the straight guys I have met through UNB are massive underwear fans. I really enjoy getting a different perspective from the guys.

If someones asks about your underwear be honest. If a friend or someone sees you have something different, maybe a pair of 2EROS or Andrew Christian. Just say I like comfortable underwear and prefer a style and cut. Don’t grab it and shove it in your pocket and hope they won’t ask. We have had a few readers this happened too and they got their friend to try better underwear!

Be honest with your partner – Tell them your love of underwear. How it makes you feel on a daily basis and how you can incorporate it into your sex life as well. Let’s face it we are wearing great undies and we want it seen at some point and to get busy. Get them involved with what you buy and take their opinion in to consideration. Relationships are give and take so introduce them slowly into undies!

Its time we bring undies out into the open. Some of you out there this doesn’t apply too. You are open post pics on Twitter with face and share your opinion. But those who are still keeping it hidden remember you are not alone and guys out there share this same thing.