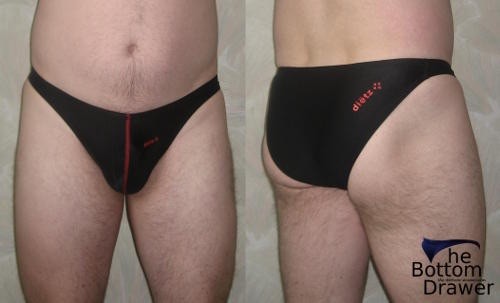 I wanted to introduce you guys to a relatively new blog on the scene  that blog is called The Bottom Drawer  you may ask what’s so different about that?  First his blog just covers bikinis and thongs.  Second is he’s a straight underwear lover   Which is awesome  we need more straight guys to get into the underwear world  here is his interview.

How did you discover your love of bikinis and thongs? Was your love like many other guys out there, you found bikinis then thongs?

I guess it all started when I received a catalog that listed various catalogs that you could subscribe to and I saw one for men’s underwear. If I remember right it was an Undergear/International Male catalog listed. I’ve always admired women in their variety of styles of underwear and swimwear. So when I saw that bikinis were available for guys my interest was piqued in giving them a try. Then probably a year or so later I saw bikinis for men listed in a Kmart sales flyer and of course I got to a store ASAP. As soon as I slipped on the first pair to give them a try I knew they were for me. Now here I am with quite a collection.

Yes, I found bikinis first. That was all that was available locally. It wasn’t until college when browsing the Undergear website that I came across thongs for men. Again my interest was piqued and eventually I placed an order. They took a few times wearing before I decided they were for me, but I liked how they looked from the start on me.

You love two specific styles of underwear, but what makes great underwear for you? Is it fit, fabric, design, color or etc?

Definitely the fit is what makes the underwear for me. I like snug fitting underwear with narrow sides. I also prefer the fabric covered waistbands over the exposed elastic ones. Always nice to have a selection of colors/patterns especially when you find a pair you really like.

My top bikini choice is Prevail Sport’s string brief. They have narrow sides, about a 3/4 back, and a nice snug fit. I also like their rio and zealand brief. I’ve recently discover the brand Dietz and like the bikinis I’ve tried from them so far. Another recent discovery for me on the thong front is the Blueline t-back thong, which is more of a v-string. It’s on the skimpier side, but love how it molds to me and has become a go to thong. Then the Prevail Sport’s string thong brief is one I enjoy. I also have some nice thongs and bikinis from Kiniki and Bodyaware, which both make good quality underwear.

Are there brands you want to try that you haven’t tried yet? If so what brands?

Since starting blogging I have become more interested in trying out different brands instead of just sticking with my main go to ones. Dietz was one I tried recently. There are a few other that are on top of my list with some items I’d like to try. One is N2N and their vintage sports brief and g-string. Also have my eye on PPU’s Bali bikini, Male Power’s bong thong, and Intymen sport thong. Also heard good things about the JM SKINZ thong and wouldn’t mind trying it. Those are all from brands I haven’t tried yet. There are lots of other bikinis and thongs out there I’m interested in too.
Underwear blogging is getting bigger and bigger, what made you start a blog of your own?

I wanted a way to share my passion or maybe more of an obsession with others and I haven’t come across many blogs just focusing on bikinis and thongs that were still active. My hopes with expressing my thoughts and views on them is that I may encourage others that may be interested in trying them out to just do it. It gives me the opportunity to be a voice that it is fine for guys to wear sexy underwear and it isn’t just for the ladies. Another thing is I’d like to see swim briefs more popular at the beaches around the US, so wanted to share my experience as I try to become more of a regular wearer of them. Unfortunately that isn’t going as well as I’d like.

Being a straight guy in the world of blogging, what has the reception been?

So far it has been positive for me. Everyone that has commented or contacted me has been friendly, supportive, and/or complimentary. I haven’t come across the negativity that I heard others have come across.

From your perspective more straight guys are falling in love with underwear, why do you think that is?

One reason I think straight guys (really guys in general) may be getting more into underwear is there are more brands and styles available especially from when I started getting into them almost 20 years ago. With more brands there is more competition to get your name out there. Then the more you see something, the more likely it seems to stimulate one into trying things, so I would think that is a factor. I’d also guess that everyone that has been blogging about men’s underwear has given some guys the encouragement to go try some variety in the underwear department. Probably all of it comes down to the Internet in the end. Easy access to information.

Where can our readers find you?

I can be found at my blog the-bottom-drawer.com and on Twitter, Pinterest, and Tumblr with the handle tbdrawer.