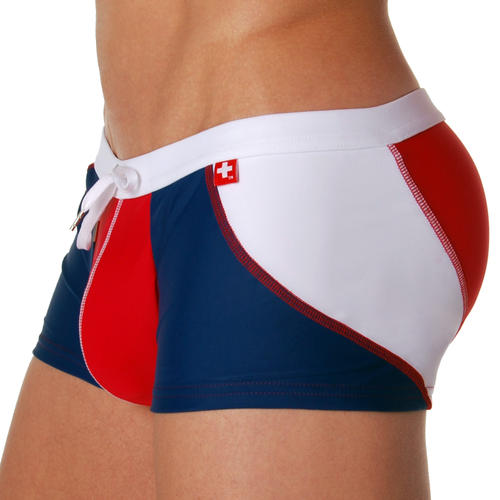 Fashion designer and episode 3 winner of Bravo TV’s The Fashion Show underwear tycoon Andrew Christian helped improve butts all across the world with his #1 selling Flashback underwear line. But sadly, the illusion of the perfect butt was lost once the summer season came around, and people started speaking up. Andrew responds, just in time for summer, with his brand new Flashback Swim Trunk.

The Flashback Swim has the same hidden support structure, which the Flashback underwear line features, sewn right into the seams of the garment. The support structure is completely hidden from the outside of the garment while being worn; everyone would think you worked extremely hard for that bubble-butt! The Flashback Swim is also made of Sport UPF Fade Resistant Fabric 50+ which means that over 95.7% of UV rays are blocked by the fabric. Sport UPF Resistant Fabric is also fade resistant meaning you will be able to wear it in the sun all summer before the fabric even begins to fade.

“I knew it was going to happen this summer,” says Andrew Christian, “Last summer I got multiple requests for Flashback swim, some people even going as far as to wear the Flashback underwear in the water to not loose the bubble butt look, so this summer I planned ahead and I can now introduce to you, the Flashback Swim Trunk; exactly like the underwear but this is actually made for the water.”