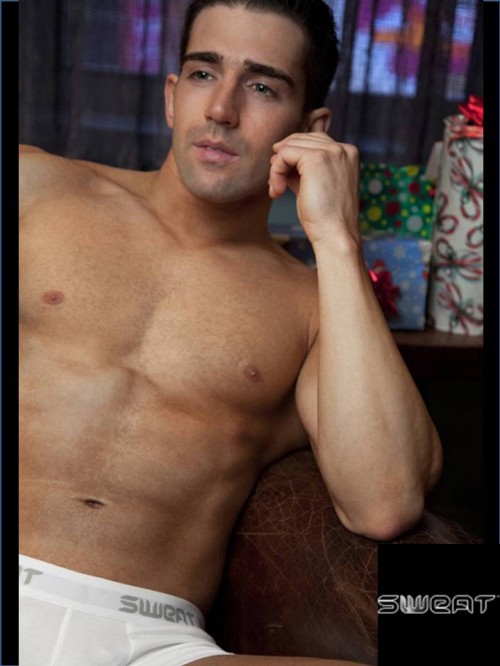 We bring you an interview with Corey from Sweat Undewear. You may have seen him on Twitter or the Swear Underwear Blog. He’s been blogging about fitness for the brand! Here is our interview.

Q: How did you get involved with Sweat Underwear?
A: It’s kind of a funny story that I like to tell about how I got involved with Sweat. I was a follower of them on Twitter for a couple of months and one day they posted a tweet saying something like “Off to the gym in my SWEAT gear”, so I called them on it and replied with a tweet saying that I’d make SWEAT look sexy for them in the gym. Hours later I received a private message saying I’m sure you would, send me an email and we’ll talk. A couple emails later it was clear that we would be a good fit for each other as they wanted to be a part of what I had going on and they believed that I represented everything they stood for as a brand.

Q: What got you into the Fitness Model competitions?
A: For the past 8 years I’ve worked out consistently with a number of different goals but one thing always remained consistent for me was the desire to do a photo shoot in the gym. Even back to the days growing up when I was 16 I envisioned a photographer taking my photo when I was lifting weights. The funny thing is at the time I was maybe 145 pounds and looked like a kid that frequently visited the candy store. (lol) Competitions are your way to get noticed and seen by others in the industry, so I knew it was the path I’d have to take to one day be able to grace the pages of a magazine. Another important reason why I got into competition scene was to have that end goal, something to motivated me in the gym day in and day out. 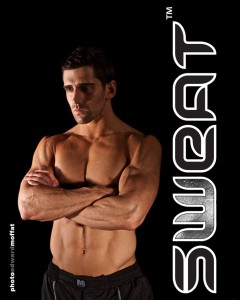 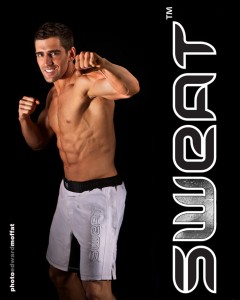 Q: What was your record in the Fitness Model competition? When does the season run?
A: The fall 2011 competition season was the first time that I took to the stage and it’s important to note that it was 6 months earlier than the original plan set out by my trainer Jason Green. All along he said it was going to be the spring of 2012 that I would make my debut in competition. For the fall season shows start in early September and run until mid November.

Q: Part of the sponsorship was shooting the Christmas campaign, what was the theme and how much fun did you have shooting?
A: Being asked to shoot the Christmas Campaign for SWEAT  was a great privilege and something that I really looked forward to doing. It was shot at the legendary Drake Hotel in Toronto, ON by JK Photography (Link if you want http://www.modelmayhem.com/2103072)  and it was tons of fun. The overall theme was to be waiting for your special someone to come home and find you (or me) wearing only a pair of Sweat underwear on Christmas Eve– Gifts all around with me being the centre of attention. I really like the final product and the image selected because it has a great sense of excitement and energy as that moment would have been happening.

Q: You currently write a blog for Sweat Underwear, what do you focus on? What is the address of the blog?
A: Part of the sponsorship with Sweat was to write a blog that focuses on building upon the Sweat Collection lifestyle and getting behind what the brand represents. Both Ron and Tal (Owners of SWEAT) are very passionate about their products and are trying to build a culture to accompany their brand based off the lifestyle they live on a daily basis in North Vancouver, BC. I’m constantly updating my blog on topics such as fitness tips and advice, health related issues, receipts for better life, and overall lifestyle motivation. You’ll  find a great mix of text, imagery, and video on the page which can be found at http://sweatwithcorey.blogspot.com/

Q: Have you modeled before? If so anything we may have seen?
A: I have modeled for the past 2 years in a number of different areas as I have a very adaptable look that can cross over between fashion, fitness, commercial, and print modeling. Some of my highlights include working with Trojan Condoms, Forever Leather, and Standfields Underwear on different projects.  The online world might also remember me from what many called Paul Reitz 2010 photo of the year! It was a photo taken by Paul in NYC with me and a pair of silver sauna suit pants in the mid summer heat. It was the start of a project Paul is working on called “Heat Wave” which is still to be completed and may even come in the form of a book.

Q: You are doing a contest right now, can you tell our readers about it?
A: At this moment my blog( http://sweatwithcorey.blogspot.com/) is running a Sweat for Success Holiday Give-A-Way and we are giving away a $100 Gift Certificate for Sweat Collection Clothing just for following the blog. All that you have to do is register to follow and you are automatically entered to win. We will be randomly selecting a winner on December 18th at 11:59 PM, so if you haven’t followed the blog already, this is a great time to get in.

Q: What can we expect in the next few months from you and Sweat Underwear?
A: The next few months for me are going to be exciting as I’ll be entering into full bulking mood to add a little more size to my frame before I step back on stage again in the spring. In the meantime, I’ll be producing a number of great stories on my blog and doing more Sweat related content (images, videos, ext). As for Sweat, I know they are hard at work expanding their product offerings. I don’t have really any dirt for you but I’ve heard that there’s the possibility of a new Sweat T-Shirt in the works that will hit the market late winter as well as the company launching their first swim suit in the spring of 2012!