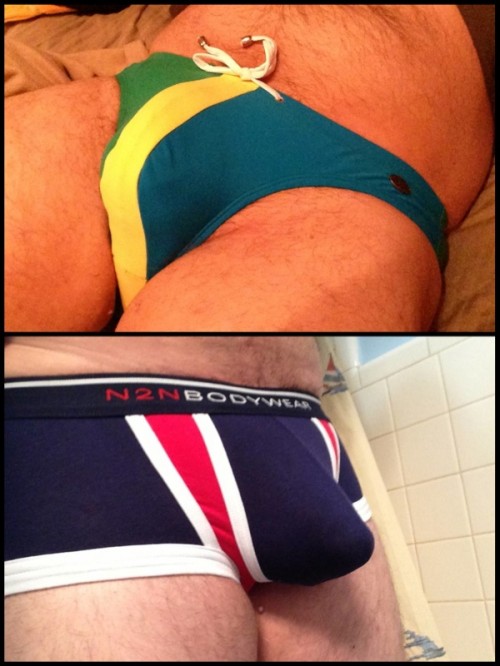 I admit it, I am an underwear addict. If there were a meeting for Underwear Anonymous I would probably be the president of the local chapter.  But, I don’t think it’s a problem. I mean I have over 400 pairs and love getting new underwear.

I would say my love of underwear went back to childhood. In second grade I remember getting this pair of blue briefs with bright red trim and loved them. There was something about them that from that day forward I wanted to have different underwear.

Growing up I was really shy. I mean painfully so, that I rarely talked to people I didn’t know. This progressed into my teens as well.  This is when I discovered bikini briefs. The first time I saw Jim Palmer wear them I knew I had to have a pair. Here was a mainstream jock in undies that weren’t tighy white. It really turned me on to go by the first pair on a family-shopping trip. I got all the courage I could to get a pair, go to the register and pay for them. My heart was racing, what would the cashier think, what if someone saw me with them, how would I get them home?

I ran to my room and put them on and they felt amazing. I was wondering where had this underwear been all my life. It felt so amazing. I would let my collection grew to about 10 pairs before my family found my stash. It seemed the world ended but no one in my family cared and from them on it was up to me to get my undies.

As I said during this time I was super shy. One reason I think I got different undies was to express myself.  Most guys were still in those tighty whities, that you get six to a pack. But I was sporting red, green or pink bikinis on a regular basis. It made me feel a bit more confident. However, I never let anyone see them in HS for fear of the hazing in gym class. Which looking back no one would have said anything? There were several guys in the locker room that wore bikinis and it was a non-issue.

These were the days in the gay world I could be called a Twink. Which is I was a tall thin kinda preppy boy. I was 6’4” at 165 with a 31 waist. I could wear anything. That changed and when I hit 27 my metabolism slowed and I went form 165 in my 20’s to 302 in my early fourties and a 42 waist. I was super frustrated that I rarely got great undies. I made up my mind to change that, over the course of the last year I have lost 75 pounds and kept it off.  My goal is to go down to around 200 pounds. My current waist is between a 36-38. I can wear great undies but my undies still make me feel awesome.

Flash forward to today. My confidence and underwear companies are up. I turned my love into a blog that is showing guys undies are fun and always should be. I’ve always been the go to guy my friends talk to about what undies they should buy, even before UNB. I love giving advice and hope to be doing the blog for many years to come