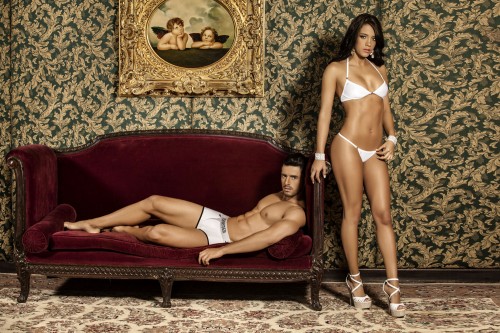 I have been talking to a few of our straight readers lately. Which I will say is pretty fun to do and I get a different perspective on underwear. I have found that gay or straight we both want to wear super comfy underwear and pairs that make us feel sexy. Wearing great underwear makes us more confident and it puts me in a way better mood. I slide on my favorite pair of Cocksox, Gregg Homme or N2N and I just feel better through out the day!

Being gay guys having our friends see us in our undies is not something that is out of the realm of possibilities. It happens and no matter what we wear we really don’t get much slack for wearing what we want. Because many of our friends wear underwear on the same level as we are, so it’s commonplace to see colors, smaller cuts and such.

On the flip side many of the guys that are straight I have talked too all say they don’t show their friends their underwear. Which I will say shocked me. They always respond if they see me in a thong, bikini or something skimpy I will get labeled as gay. I went WTF? Guys still do that crap? Underwear doesn’t make you gay, wearing comfortable underwear should be something all guys do.

We have one guy on the site, Jon, who is a college student and straight. To sum up his story (which he’s shared here on UNB), he basically said fuck it I’m going to wear what I want. Guys in the locker room commented but after a while he saw the sporting better underwear. This is what we need guys willing to take a stand and show other guys yeah I can wear amazing underwear and still be masculine.

It’s my opinion that the majority of guys think if you wear something outside of boxer you are somewhat less masculine. When I think it’s the total opposite. I think wearing what you feel best in and feeling confident is the most masculine thing you can do.

Just curious about straight guys out there do this or has experienced this? Even gay guys, have you had guys give you grief on your undies. I think UNB needs to lead the way to show all guys that underwear is not about orientation is about comfort. A straight guy can wear a thong, bikini or even a speedo!