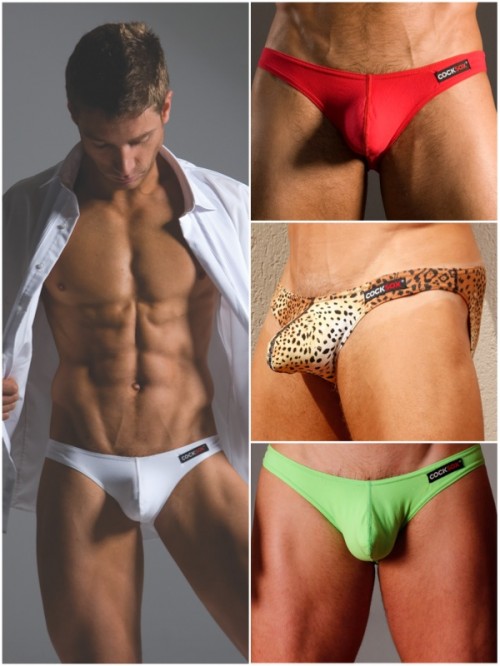 In an effort for you guys to get to know us I am starting a segment called my favorite pair. As many of you know who are underwear fans, you don’t have just one favorite pair. We have the classics we love and keep for ever. Also, we constantly get new favorites when brands release new lines and we discover new brands.

This one is a classic for me. It’s funny that you say “classic” in underwear.  The underwear renaissance began in the early 2000’s, this is when more guys started to pay attention to what they were wearing. During this time we saw a ton of companies come on the market. Cocksox was one of those. I remember seeing the pics of the CX01 Briefs, and wanted them!

The pictures were super sexy to me. Here after many years of black/white/grey boxer briefs we had a pair of bright red bikinis. To me the underwear market was opening up big time. It wasn’t for two more years before I received my first pair. They were a white pair and when I tried them on they felt amazing. That amazing pair I still have today although they are a bit large now. They were an XL, so I can’t wear them. I have since replaced them with the turquoise, magenta, and leopard bikinis.

The reason the CX01 is one of my favorite pairs is that is has an ergonomically design, great materials and makes me feel sexy wearing every time. The pouch was the first thing that hooked me. When I slid it on it was amazing the way it held everything in place. It is designed to hold a guy and fit like a glove. The second thing was its very well constructed. I have had pairs of Cocksox for several years and they still hold up. Nothing worse then buying a great pair of undies an only getting 3-4 wearings before it’s done. Cocksox has longevity in my underwear drawer. Lastly, is I feel so sexy wearing these. Especially the leopard ones. It shows off what I have under jeans and give me a little more confidence. I think that is the power of great underwear.

This is my favorite pair. We will bring you more favorites soon. This will include swim and underwear.