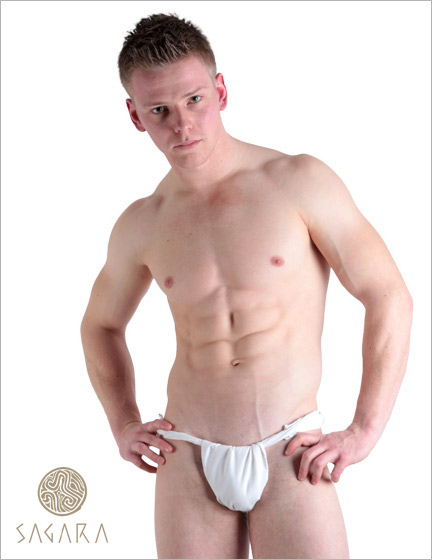 Underwear is not always about what’s newest and high tech, sometimes is going back to our roots. The Fundoshi was the traditional underwear in Japan, up until World War II. This is the information on the Wikipedia page. So it dates back quite a few years.

I used to have one many years ago. It wasn’t that hard to put on and was quite comfortable. I can’t remember why I got rid of it but remember going through my underwear drawer. I wished I had saved it but sometimes you make decisions you regret later. This is one underwear decision I def regret.

Now Planet Undies has a brand new line of Fundoshi from Sagara Lionclothes. You maybe asking how do you put them on after looking at the picture. Well, it’s not like sliding on a thong or brief, but it’s not that difficult. Once you get it on properly it’s not bad.

Here is what Planet Undies has to say: Definition: Sagara Loinclothes, return to the values of simplicity and natural origins. Focused on ancient and traditional underwear, Sagara offers a rare, sometimes unpublished, repeating the underwear of the past and by offering a version revisited, modernized, combining the traditional aspects and the strengths of the materials of today. Sagara is aimed at those who are looking for underwear like no other, for the pleasure of discovery and the universe of relaxation, hammam and sauna.