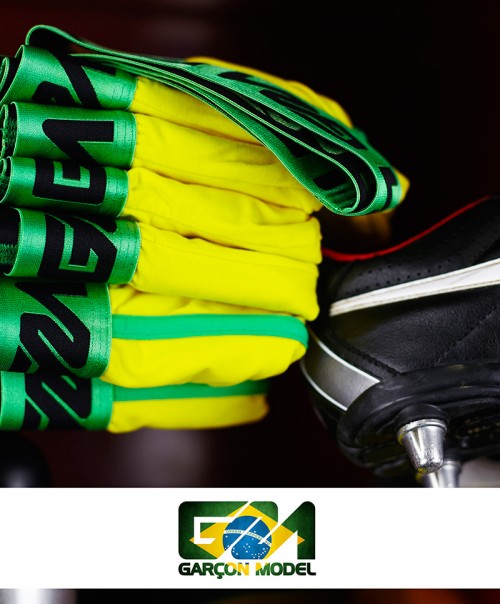 Underwear should not only be comfy but I think should give back at times. That is exactly what Garçon Model is doing, they have teamed up with Grupo Ruas e Praças. I spent some time with Garçon Model guys in Vegas. They are really great guys who really have turned their passion into a business. They really impressed me before but now that they are giving back, they are amazing! If you are looking to spend your money on a pair of undies that could make a difference go by the Brazil trunks!

Here is the press release:

With the world’s focus turning to the South American country Garçon Model is re-launching its sell-out Brazil national flag coloured trunks in time for the event.

All profits from the Brazil trunks will be donated to Grupo Ruas e Praças to help support hundreds of Recife’s homeless children living on the streets and exposed to drugs, gangs, prostitution and violence.

The Northeast coastal city is one of Brazil’s most football-mad and home to a new $240 million dollar football stadium 20km from the favelas of Coelhos and Ibura.

“We want guys to show their support for Brazil and enjoy the World Cup but at the same time raise funds and awareness to help educate and inspire the youth, to keep them safe and engaged with society.” – Mehdi Mebarki, Co-founder of Garçon Model

During the month long event Garçon Model’s iconic GM logo will be transformed using the Brazil national flag whilst a documentary film and imagery shot in Recife by photographer Klaus Thymann will be showcased on the garconmodel.com homepage.

#TEMVIDANASRUAS – There is life in the streets

The film and imagery shot by Klaus Thymann over four days in Recife highlights the courage, talent and dreams of some of the children that the money raised will go to help by funding arts and cultural projects to build positive lives off the streets.

The campaign is part of The International Exchange program which brings together NGO’s from developing countries and communications professionals, and was funded by City of Good – an initiative set-up by Nicolas Jayr from ad agency BBH London.