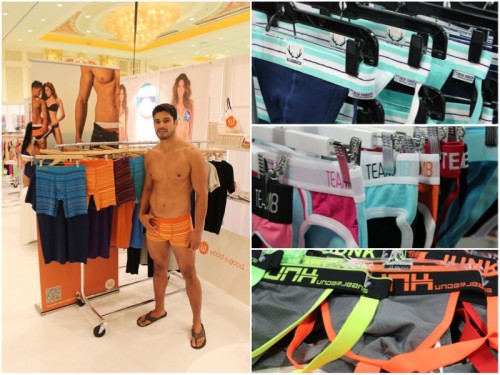 Well the trip out west was a lot of fun. This was my 10th trip to Magic/Curve! It’s hard to believe I have been to that many. The shows have changed so much since 2010, when I first started to go! Unlike the other trips this time I went to Los Angeles for the first time, the weekend before. Did a few things blog related and hung out with friends! Then I headed to Las Vegas for a week!

LA was BIG, this being my first trip I didn’t know what to expect. I stayed with the other Tim on the site (UNBTMG), he picketed me up at the Airport and we were off to the Las Angeles Eagle for the N2N Bodywear Hard Heroes Event. Which is a fetish event for guys into spandex and super hero. I would have enjoyed this much better had it not been on the night I flew in and was worn out! But it was fun to see N2N and the fashion show!

The next day we headed downtown to meet with a UNB long time favorite Go Softwear. Their office is in the Fashion District and we got there a bit early. We met with Go Softwear and saw some of the new stuff coming and I was impressed! They have been working hard. We did lunch downtown and it was a great meeting. We were supposed to do dinner with N2N that night but had a scheduling conflict! Next time.

The next day I took it easy and did some meetings for somethings coming…shhhh! Then I saw the Pacific Ocean for the first time and headed to the airport to go to Vegas. The short flight from LAX to Las Vegas was half full and i Loved it! I landed and got to the hotel at 11. The weekend in LA drained me so I crashed almost immediately.

Monday, Aug 18 both the shows started. It is standard for me to go to Curve in the morning and head down to Magic in the afternoon. So around 8:30 I head up to the Sands Convention center. This year there was just one brand at Curve. That brand was Wood Underwear. It was great to catch up and find out about the new stripes (in the picture above) and the just released camo line! It was quick but I headed down to the Mandalay Bay Convention Center.

That night we had our Meet and Greet with some of the brands. They are always fun to get everyone in a social situation. I have always wanted to do something in Vegas for our readers like our Industry Meet and Greet. We may try something this year! While there I tried to Tweet and send some instagram pics. I”m getting better!

When I got there I had to meet up with Blue Buck, Justin Case and Steele sWimwear. I can’t wait to tell you about Justin Case! Also in the meeting was Private Structure and Punto Blanco. This year Punto Blanco is going to amazing! It won’t be released till Early next year though. Then I met with Andrew Christian in the afternoon.

Tuesday was just as busy. This time it was with Teamm8 (who are amazing), Junk UnderJeans, 2(X)ist (Jason is awesome), Bwet, Frank Dandy, Timoteo, Rounderwear, and more. It was a very productive week.

We are going to have more coverage coming when lines are released. We have changed our coverage to cover it as they come out rather than after the show! If you have any questions feel free to send a question via twitter to @unbtim or info@underwearnewsbriefs.com