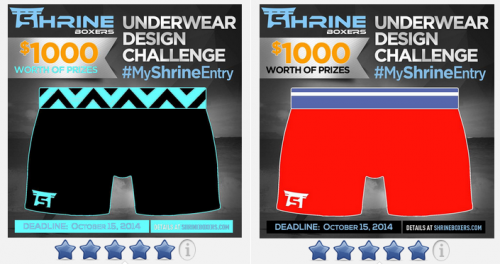 I am super excited for Shrine Boxers! A few weeks ago we told you guys they were having a “create your own underwear” contest. Where you got to create a pair of underwear. After creating it it was submitted and a lucky few were chose to be voted on. Well they just released the list and after voting is done we will see which pair will be produced.

After talking with them, I think we are going to see some amazing things from Shrine when they launch. I have also been told they are going to change my opinion on Boxer Briefs. To that I replied bring it on! We will have an interview with them soon, they have an amazing story. Plus they are made buy really great guys! So stay tuned!