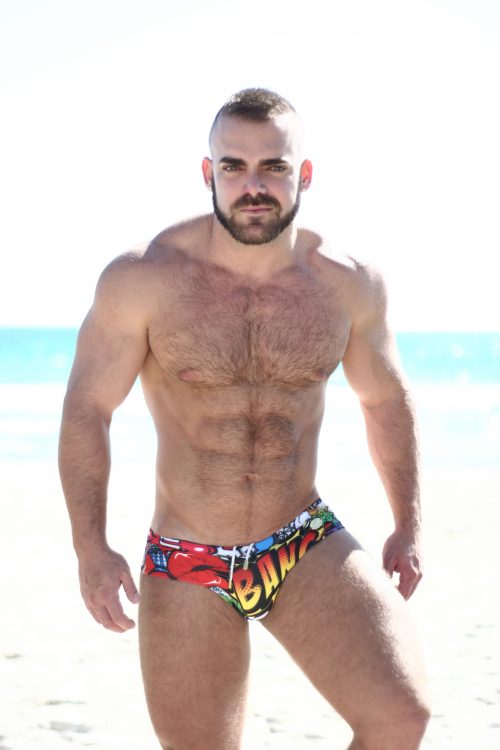 We are excited to talk to BaNG! Clothes‘ Duny De La Cruez. The brand has some on strong in the world of swimwear! This year they also started a great line of tanks and more! We have profiled them several times as a brief distraction but now we give you more about the brand!

Thanks for taking the time to talk to us today Duny. First where did the idea of BaNG! Clothes come from?
My business partner and co-founder of BaNG!, Cristian Cravello, and me; we were having in mind to launch a line of activewear inspired by Miami. But when we think of Miami we don’t see the typical images of flamingos and palm trees. For us, and for a lot of people we connect with, Miami is more about the beaches, about its nightlife, and about taking care of yourself at the gym. And almost by playing with those words we realized we were wanting to put together Beach, Nightlife and Gym. What left us with its initials: B, N, and G, and there it was BaNG!, right in front of our faces.

How did you go from that spark of idea to BaNG!? What were some of our early challenges and successes?
Hardest challenge was getting made in Miami, the type of product we wanted. We had in mind a very specific type of quality, finishing, and stitching style, that could deliver a high-quality product. And the first attempts were really disappointing. Luckily, we found the right team of people, and after going through a tough learning curve together, we finally achieved the type of product we wanted to put out there.

Why did you choose Miami as your location for the business? You make all the swimwear in Miami as well?
Yes, we do. And from what I was commenting before, we made it our mission – and it is our pride – to have our stuff all manufactured in Miami. For many reasons. Because no one else was doing it something like this from here. Because we wanted to add something different to this city. But most of all, because we had a clear vision that the swimsuits were going to be the stars of our brand. And just like when you think of watches you think of Switzerland; or for pasta nobody does it like Italy; we felt certain that if there was one thing Miami can own and has all the authority in world to provide like no one else, it’s gear to use at the beach, under the sun, in the form of swimsuits, of course.

You guys are super creative, what spurs your creativity in the world of men’s swimwear and gear?
Wow! There’s so much stuff. I guess it’s the way our ideas collide and how the different backgrounds complement between my business partner and me. Cristian is more of a pop-culture freak. His influences can range from pop music, to 80s designers, to Italian directors from Cinecittà’s golden era. I am more the fashion retail and trends guru of the team. I have worked several years running my own clothing stores in Spain, and working first-hand with all the main European luxury brands, from Gucci, to Fendi, to D&G, Moncler, all of them. So I feel very comfortable when it comes to putting together all those influences from the fashion industry. And then I guess that the fact that I have traveled around most of the world, has really opened my mind in terms of creativity and influences that appeal more to a global type of segment. 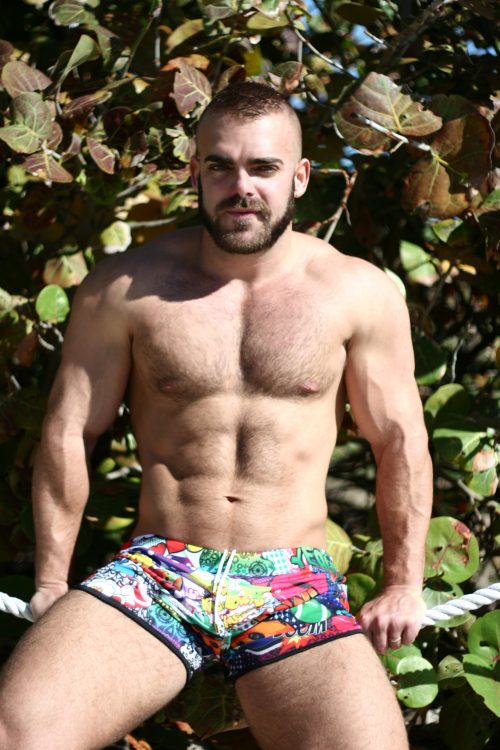 You create some of the most amazing prints what has been the inspiration of them? They have a very comic book/graphic novel feel to me, was that what you were going for?
Many people strongly associate us with comic books. But the brand it’s not only about that. As I was just saying, there’s a lot of pop-culture influence in general in our collection. The comic-book approach, was I guess only our first step; because it is one on the myriad of themes pop-culture can address. But as we launch our new prints for 2016, it will become more clearer what is the overall scope of BaNG!’s style. Suspense-suspense…! Haha!

BaNG! makes some really great swim briefs, how did you determine the cuts you were going to produce?
On that end, may be that’s where my growing up in Europe mostly shows off. We went for cuts that are more up to the European standards, than American. Not in terms of sizing, which in Europe tend to run smaller. We kept more a universal fit on that end. But for all our styles we went with cuts that tend to show more skin, or fit tighter, in comparison to the average Speedo-like swimsuit you can find here and there.

Your site says you guys get to test out new swim suits on the beach and some killer pool parties. Do both of you wear the new pairs?
Absolutely. And there’s not one single model that we get to launch, until we wear it ourselves first, and even see how colors react after drowning them in salt water in the ocean, or with chloride water in a pool. And if all is fine and they pass our “test of fire” as we like to call it, then the swimsuit gets our seal of approval and is finally released publicly. 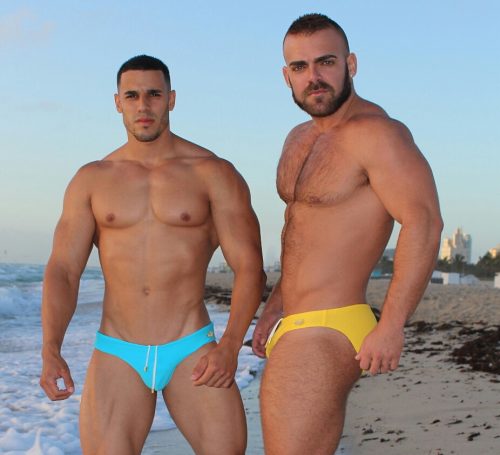 Wearing a test pair to an event, did you guys ever produce a pair that people went crazy for and kept asking where to get it? If so which pair was it?
It happens actually all the time. And not to ourselves only. Lots of people approach us right on the beach or when we walk by on Lincoln Rd or on Ocean Drive, and ask us where did we get the stuff we wear. And our customers write to us all the time, telling us how thrilled they were that they wore our BaNG! gear in a cruise, vacation resort, or pool party, and they were asked all the time about their swimsuit.

Duny, I see you in a lot of the pics for BaNG! you look awesome in the pictures, what made you pose for pics rather than hiring a model?
Saving costs – it is my own business after all, and I have to by a wise executive as well – hahaha!!

Your bio on the site said you love to travel, have you spotted others wearing your swim wear on beaches around the world?
Not directly, but we keep receiving pictures from our customers wearing our stuff from the least expected remote corners of the world. Asia, Middle East, Australia, Europe, South and Central America, anywhere! The brand has grown and spread globally so fast we can hardly believe it.

BaNG! Also makes Convertible board shorts, can you tell us what they are and why you made them convertible?
Rather than convertible, we called them “Hybrid.” And the name comes from the fact they they are made to use with a double purpose. As swimwear, in the water, of course; as any other regular surf-style boardshort. But also as casual wear, like funky pants you can use for when you want to go out for a walk, or meet your friends for brunch, or wear something relaxed while hanging out anywhere but at a beach. For that purpose, we started with the classic style of surfing boardshorts, but then we switched the fabric to one that drapes more smoothly. It feels fresher, softer and comfier to the skin and touch. You can walk for ours with them on and you won’t get you rushes on your legs. And the cut is also tweaked a bit, so that it offers a more flexible fit that shapes and molds the body into a much sculpted look.

We think more US guys should wear swim briefs. Is there a celebrity you would love to see in your swim briefs?
Joe Manganiello could possibly be the ultimate BaNG! man on Earth. 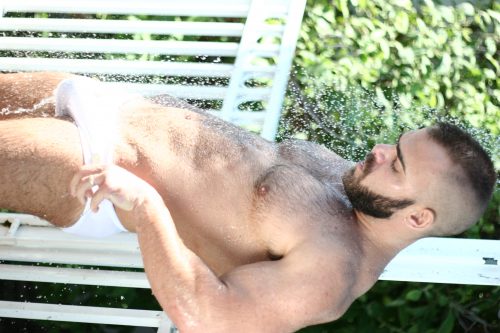 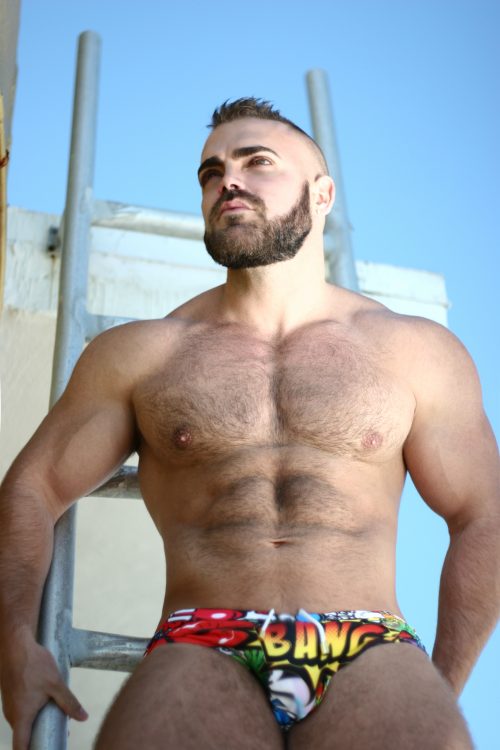 What advice can you give our guys on buying BaNG! Clothes?
Don’t be shy about them. Go for the prints, and once you have them on, own them and flaunt them. Make the sand your own runway with a BaNG!

Where can our readers find you on the net and social media?
Our webstore: www.bangclothes.com

Join The Men of Summer in Swimsuits by BANG!® Clothing Miami