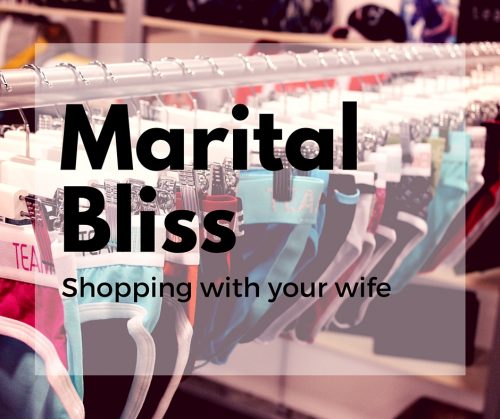 Marital Bliss—Underwear Shopping with Your Wife

On a recent weekend trip to Portland, my wife and I ventured into an alleyway downtown and found this brilliant little French restaurant. I can’t recall what we ate, but I do remember a delightful dessert that came out flaming. The French restaurant is irrelevant to this story, but does set the tone for what happened later on that evening.

As we left dinner, we grabbed hands and made our way back to the main drag. It was then that I noticed a massive green and white sign blaring the name “underU4men” in bright lights as if it were calling my name. I must have made a gawking noise because my wife asked me what was wrong. I simply pointed and insisted that we stroll down the block to check out one of the largest men’s underwear stores on the West Coast. She promptly set the limit of my spending budget, locked her arm in mine, and said, “Let’s go buy some briefs.”

As we approached the large pane glass windows, I was amazed at the enormous inventory on display. People were moving about inside as clerks rang sales at the sleekly designed registers. We entered through the doors and were greeted with a cheery West coast, “Hello!”

I will say that entering into a men’s underwear boutique can sometimes be intimidating. The clerk that greeted us was female and asked what we were looking for. We told her that we were just browsing and she made us feel write at home. The most incredible feeling of the night was that my wife was right beside me talking intelligently about designer underwear.

I asked the clerk about the Andrew Christian Almost Naked line and if they carried Obviously. She answered my questions and pointed to the Obviously wall display. She then engaged my wife in conversation about bargain shopping and showed her an entire wall with pull out bins full of $5 undies. I decided at that moment that I must have died and gone to Undie heaven—cheap designer underwear and a beautiful woman helping me pick them out. We purchased a couple of pairs and headed back to the hotel.

The romantic dinner and the underwear shopping set the tone for great conversation that helped us to connect on a very deep level. What’s the moral of this little story? Take your wife underwear shopping with you—it might just light a new fire in your marriage and create a little marital bliss.

Salvatore is an Assistant Editor for UNB. He's a normal guy that's married with kids and loves everything underwear. Communicate with him on Twitter: @manatomicallyme