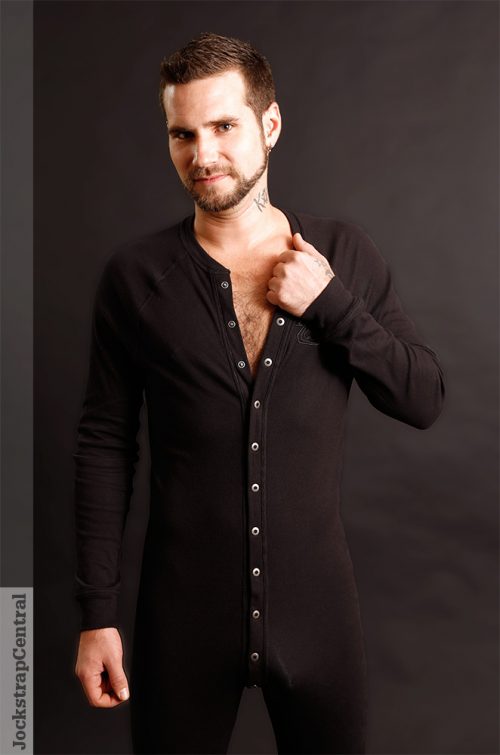 This is a big deal. Nasty Pig usually does one single production run of their union suits so when they’re gone, they’re gone until next year. Jockstrap Central brings in what they can but consistently sell out within weeks and countless customers end up being left out in the cold.. .literally. In other words, snag them while you can.

It doesn’t get more masculine and sexy than this. Union suits conjure up images of the working man and while Nasty Pig respects the union suit’s past with their version yet they improve it in every way. As expected, they’re available in classic union suit color red, in serious black and new for this year, a very masculine military olive-green.

Instead of the traditional flannel, Nasty Pig uses their signature super-soft, top quality lightly ribbed spandex/cotton underwear fabric. Here’s the hottest part: the snap closure that runs down the chest also runs all the way under the crotch and around to the back ending just above the butt – is an innovative back closure solution, way sexier than the traditional flap. Need we mention that the snap closure, both front and back, make for an easy exit and entry. Finally, the union suit is finished with a tone on tone Nasty Pig logo on the left chest.

Wear them everywhere you want: under your jeans when you hit the streets, paired with a sick set of high tops, or be truly unique and wear them as outerwear before it’s gets too cold. You can even wear them with nothing at all next to a roaring fire on Christmas morning.

Of course there is one thing hotter than a Nasty Pig Union Suit and that’s a Nasty Pig Union Suit presented the Jockstrap Central way. They’ve got their favorite exhibitionist models Adam Stray and Caleb King to gear up and let’s just say there may be a few explicit shots over at their website. Grab a towel and enjoy yourself.!