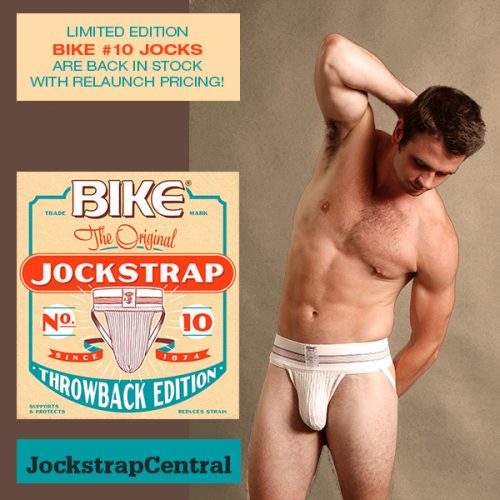 I never like these kinds of posts. Where we have to bid farewell to icons in the men’s underwear world. We had to say goodbye to UnderGear and now Bike Jockstraps. Bike has been synonymous with jocks since they were released. Up until the 80’s they were the jockstrap. Anytime you needed a jock for sports, Bike was the brand you bought. It was my first jock that I ever wore and bought.

In the 70’s/80’s the jock took on a new life in the fetish world. Guys into leather would often wear the Bike #10 jock with their gear. This created a whole subculture in the gay world. It remained largely unchanged for most of the 80’s. The main additions were colors (Red, blue and black). You no longer had to get them in just the traditional white. Also, in this time the swimmer jock was around. It wasn’t as popular as the traditional jock, but it had its supporters! Yeah, I had to do it.

Why did the jock take off so much with guys?

First, back in the day they were cheap. I remember paying $7 for one at a major sporting good store. I would regularly pick them up when I was out and found myself in a sporting good store. Which sadly, wasn’t too often.  But I made a few special trips to get the black #10 jocks.

Next, they were sexy. The design was made to give support to the wearer in sports. Nothing worse than a groin pull. This made the design more function over form. However, the form showed off everything about a guy. The pouch which was a mesh rather than a solid material followed by the open back. Is it any wonder that the fetish community took to these garments? I think not!

Lastly, they weren’t considered fetish wear. This was one pair of underwear you didn’t have to mail order or go into a “seedy store” to buy. It was at every sporting good store across the country. When  you went in to buy them no one even questioned you about the purchase. It didn’t matter if you were buying for you or someone else. Only the purchaser knew the reason for buying. The clerk in the store just rang it up and you were on your way. In this time if you wanted a thong, it was a bit harder to get. They were made but not very widely distributed.

Why did the classic Bike Jock go extinct?

There are a few answers to this question. Each one sort of builds the case on why Bike has ended.

In the 80’s/90’s the sports jock market had more competition. I used to go in the sporting good store and see Bike and maybe one other brand. Then in the late 80’s you would see more and more brands. Bike then raised their prices and the other jocks filled in the lower price levels. However, in my opinion, very few of them had the quality of Bike.

Less guys are wearing jocks for sports. There was a time when it was pretty standard issue for guys in football, baseball, and other sports were issued a jock. It was often a comedy point for movies. In the 90’s we saw the rise of gear from UnderArmour and Nike. They replaced the jock for many athletes. Now they were wearing compression shorts over jocks.

Another reason for the decline is the rise of the fashion jock. In 2009, I named it the year of the jock. This is the time that jocks exploded on the underwear market. It seemed everyone came out with a jock. This included using bright colors and prints in the pouch design. Including using different colors for the waistband and leg straps. Gone also, was the nylon pouch. Jocks are made in every fabric you can think of and in every combination. Cotton, spandex, leather, neoprene and more. Adding on to this is brand reimagined the jock. One of the prime examples is the C-IN2 Grip jock. There are many more who have given their take on the jock.

Bike itself redesigned the classic jock. The #10 jock was a classic. The wide waistband was the standard. The band has thin stripes in the middle. The band paired with the label in the front. 1 inch leg straps and nylon pouch was a classic. In the 90’s they changed the jock from the #10 to a more modern look. The band was a bit smaller and had Bike written into it. It just wasn’t the same. It’s like when Coke made New Coke. But unlike that example, they never went back. This stopped me from buying them as much as I did. I just missed the classic design.

Lastly is the fetish market embraced the jock. Companies started to create jocks specifically for the “fetish” market. One of the first was Nasty Pig. The jocks they made reflected the leather/fetish community. The new designs become in fashion with the fetish community. It could tie into other items they already have in gear or would be from brands. Other brands like Cellblock 13, Slick it Up and more joined the market.

All these things were great things for the underwear market. Especially for jock lovers. It wasn’t one of these things but the combination of events that lead to this decision. It seems more like a financial decision to end the entire line. Russell doesn’t seem like the type of company to embrace the fetish side of the jock. I don’t think it was a market they wanted to be in anymore. How many of us actually bought a Bike brand jock in the last 10 years? I can’t say I did.

So long Bike, you were a pioneer and synonymous with Jockstrap. Thanks for being my first jock. You will be missed in the underwear world! But don’t fret, there are many other brands to fill the void!