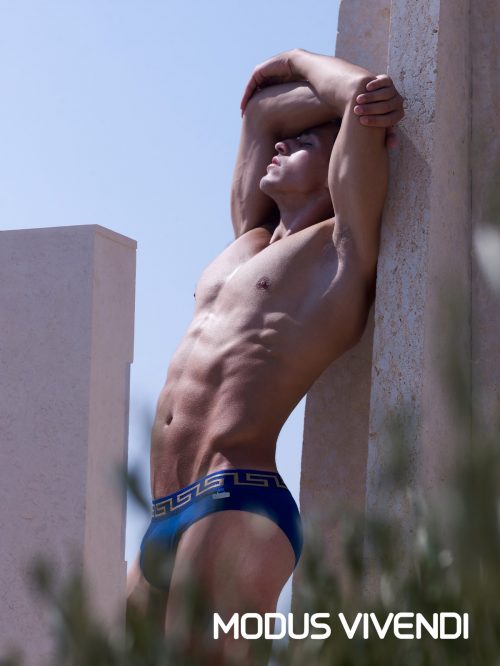 Modus Vivendi is without question one of the world’s most prolific brands of men’s underwear and, as you probably know, it is Greece’s premier brand.

As it does each year, Modus Vivendi has put forward in 2016 a very extensive collection. It has featured designs of many different inspirations, presented in photographic campaigns from the four corners of the earth.
With its latest release the brand returns home, to Greece. The new Meander Line pays tribute to Ancient Greek civilisation, drawing inspiration from perhaps the most recognisable symbol of classic geometric art, the ‘meander’. This ancient key pattern has decorated countless buildings and adorned sculptures and friezes, becoming an icon of Greek art.

The Meander Line is luxurious. It comprises underwear and loungewear in two colours, blue and white, embellished with gold accents. Made from a top-quality cotton blend fabric, the line offers favoured styles that will please every man.

The campaign for the Meaner Line was produced in Athens. The photographs are the work of one of Greece’s top creative photographers, Vangelis Kyris. Our Greek kouros, Christos Katsavochristos, presents the line in classical poses of strength and control. This stylish underwear is bold, masculine and comfortable. As you would expect from Modus Vivendi.