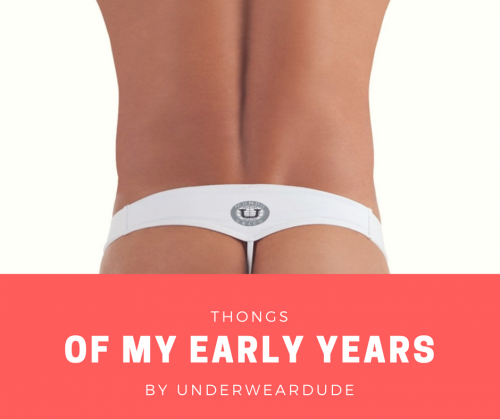 Let’s talk a stroll down memory lane, shall we? A little history lesson, about thongs in the early to mid 200s, back when I first got into them.

Note that this was in the says before social media. It was incredibly difficult to discover new brands. For instance, if I hadn’t happened to hear about Ergowear from a guy reviewing another brand, well it might have taken me years longer to discover them. This was back in the day when Andrew Christian was still just making briefs, but I digress.

Before I got into underwear I knew about man thongs, but only in popular culture/social reliance. That means I imagined them as all yellow banana hammocks, loud pairs only worn by male strippers for the enjoyment of others. Imagine my surprise to find that their were more sensible options available? Note that at this time I still found Cocksox too cray, but lets get back to thongs. But which one to buy with my limited collegiate income? Like most people, I began to scour the reviews for all the various pairs of all the sales sites that i could find back then. What i found was interesting.

Back in the day, there were just a few “big” thongs around, those that got a lot of reviews, usually good ones. People tended to stick with what they knew a lot more back then. Maybe it was because it was less common to find a reliably good thong. Anyways, they were the 2xist Thong(Along with it’s identical twin by Cin-2), the Calvin Kline Body Thong, and the Mundo Unico Thong. Joining them slightly later was the Canadian JM Skins Thong. These were the pairs that got the most consistent good reviews, and had so many more reviews than more “interesting” pairs. These pairs have a special place to me, in that they were sort of the “pillar” pairs when I first got into thongs, and while for many they have been relegated to the wayside for more extravagant pairs, I believe they are important. Let’s talk about each of them for a minute, shall we?

2Xist Thong- a classic. an icon. What else can be said about this pair? Recently inducted into the UNB Drawer of Fame, this pair deserves this status. It was constantly the highest rated and most reviewed thong among the sales sites I visited at the time. Many reviewers liked it so much that they started wearing only it! It’s easy to see why. Solid cotton construction means no special laundering instructions. The thin back made it comfortable for newcomers to thonging, and it’s athletic design made it possible to be disguised as a “weird jock” while changing in the gym. While not perfect, i’m happy to have this pair in my drawer.

The CK Body thong usually came next on the list with many loving it, though some had complaints about it’s high rise nature. Still, the fact that a big name brand like CK actually made a men’s thong seemed to help give validity to men’s thronging. Another pair that I am proud to own if more for the brand name/style combination or as s history lesson than actually worn.

Ah, the Mundo Unico thong.  Unlike the others, it was available in bright colors and had a unique for its time back that looked uncomfortable but each positive reviewer shouting to the mountains “try it, you’ll like it!”. While some men found the g-string-thin back to lead to an uncomfortable “scissoring”effect, others found the back, which was thinner than the 2Xist’s , to be a very good, commenting on how invisible the pair is when worn. I do not own one of these pairs, and they seem to have fallen out of favor somewhat, as I can’t really tell if they are still being made,but it is on my to buy list for the year.

Lastly, we have the JM Skinz Thong. While more recent reviews place it’s Natura cousin as being better, at the time this pair was talked about as some sort of secret pair, unknown to many but uncommonly good. It took me far too long to finally get a pair of these, quite recently actually, but I have found the rumors and reviews to be true. Its is a quite good thong.

So by now you’re probably wondering, “So which one of these pairs did he choose as his first thong?”. Well, I’ll tell ya. To be honest, it was none of them! Which thong came first, and why, well, that’s a story for another time.  So here they are, my pantheon of “great thongs” from my early day in the world of underwear. Things sure have changed a lot since then, huh? Which other pairs form way back when do you think deserve to be on a pedestal? Which other underwear time periods would you like us at UNB to discuss? Let us know in the comments or send me a message on twitter @underweardude. I