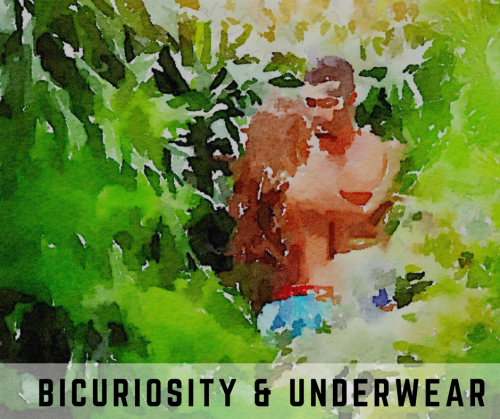 This might be a controversial opinion, but I think everyone is a little bi-curious subconsciously. Even though I consider myself straight and have a girlfriend, I know there is a small part of me that is curious about guys. I think that my interest in underwear is how that part of me is expressed.

Guys, though they might not admit it, are constantly thinking about their package. Size is something guys think about probably every day, and it’s usually in a context where they’re comparing themselves to other guys. An example of this would be worrying you aren’t going to measure up to a previous lover of your partner. This type of thing likely stems from bicuriosity on an unconscious level.

I think I first realized this aspect of me on a conscious level when I was walking down the underwear aisle at a store. I couldn’t help but stare at all of the different models on the boxes and their ripped physiques and stylish underwear. Most notably of all, my eyes went directly to the bulge. I think this phenomenon relates to other guys being curious about what other guys are packing, something that underwear marketers surely tap into when designing their boxes. For this reason, wanting to know how you compare to other guys is not gay, it’s human nature.

To reemphasize, though I wouldn’t necessarily want to have any type of relationship with a guy on an underwear box, I often find myself attracted to his underwear and bulge. I think it comes down to the mystery aspect of underwear. It hides what is underneath and leaves the rest to the imagination, which really can be quite alluring. I personally wouldn’t want to look at a naked guy, but a guy wearing underwear is completely different for that reason. It allows you to think about how you compare without actually seeing someone’s package.

I’ve been much happier since I’ve embraced this side of me, not worrying about if looking at a bulge or wearing a particular type of underwear is going to make me gay. It’s okay to be curious. It’s even better if you find a positive thing to channel that part of you into instead of suppressing it. The moral of the story is to not worry about what others think, be confident in your sexuality, and pursue what makes you happy.