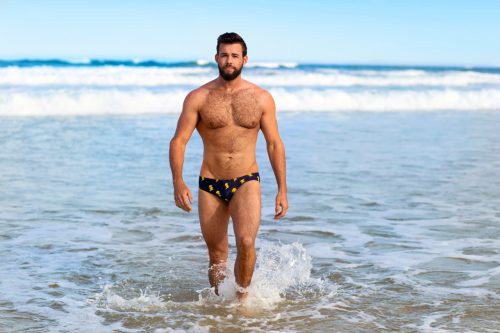 We are joined but what you could call a swim brief expert, Adam from Sluggers Swimwear. We have profiled Sluggers on the site. But, for those who don’t know, Sluggers is an Aussie brand of swimwear. Adam, the man in charge, agreed to talk to us about swim briefs and the difference between the US and Australia.

Thanks for joining us, Adam. For as long as I can recall, swim briefs have been a part of life in Australia. I would see the life guards competing in them and the beach at Bondi with most guys wearing them. Why do you think is not a big deal to wear a swim brief there?

You might be amazed to hear this – but swimming in daylight hours on Aussie beached used to be illegal! The laws were only changed a few years before World War One. We have come a long way.

Like you pointed out – our lifeguards wear them. Old blokes wear them. Kids wear them. Even our ex-Prime Minister wears them at his local beach where he is a regular patrolling Life Guard.

If anything in Australia Sluggers are quite daggy. I often refer to Sluggers as being designed for the Fashion Bogan (which I guess is Aussie for Redneck) as that’s the group I identify with! We just show healthy and positive images of fellas wearing them. My whole approach with Sluggers was that we always targeted Men. Just Men. That was our customer – everything else is just a subset of that.

In Australia, we tend to get the Bogan Dads like me and fit young blokes in their late 20s and up who are looking for a good quality pair of swimmers at a reasonable price.

Somewhere along the line in the States Speedos went from being practical sportswear to something else. In America, it feels like you’re making a statement when you’re wearing them, whereas in Australia it’s because you’re going to get wet. It’s definitely a lot to do with how they are marketed.

Americans are also a lot more conservative than Australians when it comes to swimwear. Even your board shorts are a lot longer and baggier than ours, but I think that’s really because so many Americans live so far from the beach the surfwear isn’t really for surfing. We’re so alike in so many ways – but you can really spot the Aussies a mile off on the beach in Waikiki.

Over the last few years have you seen guys keeping the status quo or are guys moving away from the swim briefs?

In Australia, briefs are definitely coming back. Since we started Sluggers Swimwear in 2014, we have really seen an increase on the beach. I think this is partly because of the amount of new brands and styles out there, but also social media has shown fellas that it’s OK to wear them at the beach. I wear them because they are practical. You dry fast. And you get an epic tan line!

I really feel like there is a genuine resurgence in swimmers like our Sluggers. As one of our models recently pointed out, it’s becoming even less of a big deal to rock a pair, and we all think it’s yet to really explode.

It’s got a lot to do with the recent boom in fitness and health for young men. They’re eating better. Exercising a lot more, and drinking less alcohol. They’re proud of themselves, and they have incredible body confidence. When I was growing up very few of my mates had a ‘rig’. Now it’s like every bloke has a rig, and they are keen to get outside and make the most of it. 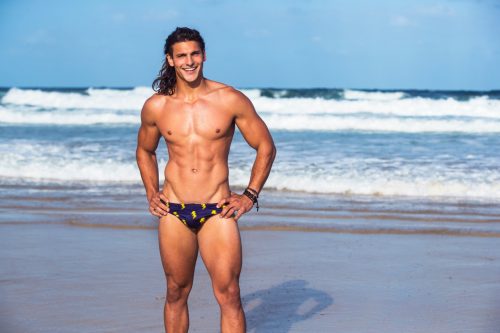 In the US, we have very few sports stars that would be seen in a swim brief. In Australia do you have rugby or football stars wearing swim briefs on the beach?

All the time! And the louder, the better. There’s an unofficial competition between players as to who can wear the loudest swimmers, and plenty of footy teams go for a dip in the ocean in the middle of winter for a natural ice bath. We have had locker room photos posted by footy players sporting a pair of Sluggers – especially our local team St George.

I’m curious as to how Australian’s see the US and our views on swim briefs?

I reckon you could lighten up a bit. A lot of a marketing for American brands (or brands in America) gets quite ‘soft porny’ so I can get why a lot of blokes feel a bit strange wearing them to the beach. I wouldn’t want to identify with that either – it’s not who I am.

When I think of an American in a “Speedo”, I think of a muscled up bloke in basketball shoes or roller blades listening to a walkman on Venice Beach! Haha! He’s probably wearing a lot of tanning oil as well. It’s a very 80s image.

When I think of an Aussie in Sluggers, he’s being active and having fun in the sun with his family or with his mates – and it’s a very contemporary image. You guys need to turn that image around! Or maybe let me borrow a Walkman next time I am in town … do you still have them?

Owning a swimwear company you sell swimwear to guys around the world. What do you see is the biggest difference between Aussie men and American men wearing swim briefs?

You guys go for the wider sides, and you wear them really high on your hips. In Australia, we wear them straight across the hips and pull them down from the back whereas you guys tend to pull them up at the sides when you come out of the water. (So you can really spot an American a mile away on Bondi Beach!) 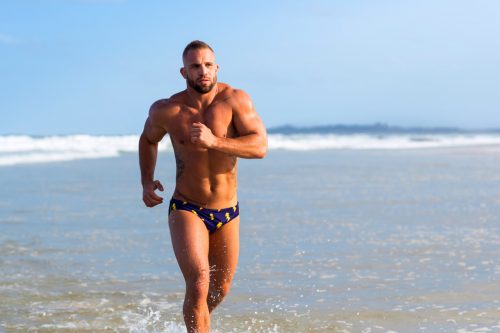 To follow up on that question, we have talked about differences between the styles of swim briefs guys like. Your best seller style in Australia is different from the US. What do the Aussie guys prefer? What do US guys prefer? Why do you think there is a difference in preference?

We definitely sell more DEETEES and Classics in America. You guys must do some serious lunges or squats in school sport because Americans have bigger glutes than Aussies and tend to buy the styles made for guys with bigger bums. You can even see it on the images posted on social. You guys are solid!

What Aussie advice do you have to American men who want to wear swim briefs?

Get amongst it, son! Just don’t pull them up too high 🙂

Sluggers No Bad Days is back