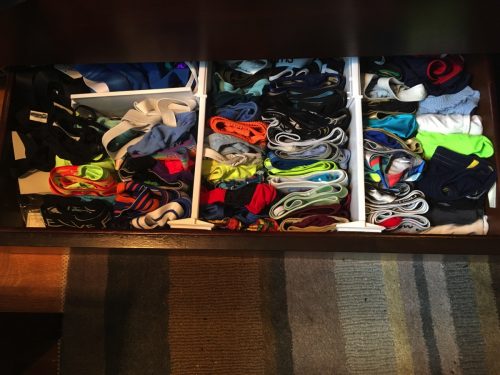 Hi, everyone, and welcome to the first post of a new ongoing series, entitled “Show us your drawers!”(Note: If you can think of a better name, feel free to use that instead.) This series is a place for you the reader to show of your collection and storage method. This will be a blast! We are starting off with a look at all the guys who make up UNBs’ drawers, beginning with..me! 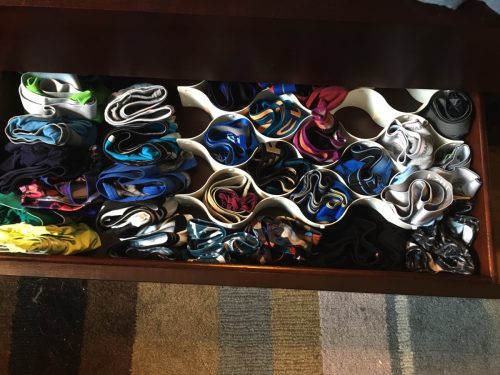 I originally had all my underwear in the same place it had been for years: at the bottom drawer of a dresser, tossed in along with my socks. As my collection grew, I began wanting more space, and eventually became enamored with the idea of under-bed storage. I loved the idea of being able to roll over in bed in the morning, pull open a drawer, and pick out my pair for the day while still in bed. Sadly, while this pair of built in’s doesn’t make that dream a reality, it does hold all my pairs. The drawers don’t pull out all the way either, which means there are a few more pairs not seen in the picture and can make putting pairs in the back annoying. I have so many pairs I don’t just have one underwear drawer, but two!

The first picture is of my daily wear drawer. There you will find briefs, boxers, trunks, and a few semi-skimpy pairs. This si the stuff I wear day to day, the stuff I feel I would be ok to be seen in, etc. The organizer therein is one i’ve had for decades that was originally meant for socks I believe but was repurposed.

The other picture shows my skimpy drawer, with, left to right- jocks, thongs, and bikinis, as well as a small spot in the back left behind the jocks for pairs for special occasions. Also, yes, the bikinis and thongs are separated by those that have a waistband, and those that do not, thanks for noticing! The organizer in here is from Bed Bath and Beyond, but It doesn’t quite fit well enough. I guess that’s the downside about buying under the bed drawers that match your bed from a group that doesn’t offer organization for them. I like how everything looks folded, but I’m not sure if I’m going to keep it up. It’s a lot of work! I own slightly over 100 pairs, which can make laundry day a real pain in the butt.

Want to show us your underwear drawer? Send in your submission to info@underwearnewsbriefs.com with the word “Drawer” in the subject line, along with a photo of your underwear drawer and a short description if you would like. Check in next week for a look at another drawer from a UNB guy!