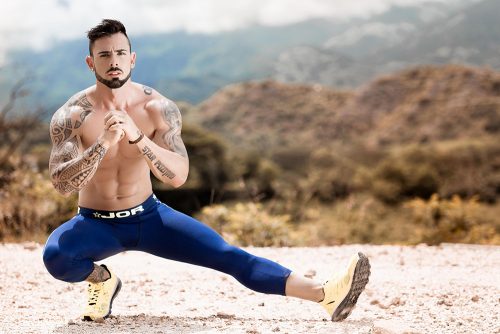 There is something that is causing controversy in gyms across the country… Well, not really but I thought it would be fun to make that statement. But, there is a new conundrum with the rise of runners. Do you wear them by themselves or do you wear shorts over them? There seem to be two different views.

There is the group that has no issue wearing runners to the gym without anything over them. A guy has curves and bulges and it’s nothing to be ashamed up. Outside of the obvious show-offs, most guys who wear them to the gym want the extra support throughout a workout. They are not there to show off everything they have to everyone who cares to look. The runners simply are comfortable gym gear. Most guys who don’t wear anything over them tend to wear the brighter colors and prints. They like having fun with their gear as much as their underwear.

Then there are the guys who feel that you should wear shorts over them. These guys do it for modesty. They don’t want to show off their business to everyone. These guys are a bit more conservative. They don’t wear the bright colors and prints. They stick to the classic black, navy and such. Wanting the same support as the other guys, they just feel its less of a statement piece and more function over form.

Which type of guy are you? Which guy is right? My personal opinion is that you should be able to wear them without shorts. I hate the extra layer on me, especially when working out. Plus I like the awesome colors as well. But, it’s about doing what you want, if you feel comfortable going without shorts and if you don’t wear the shorts. Do what you feel best.

Let us know which you do!