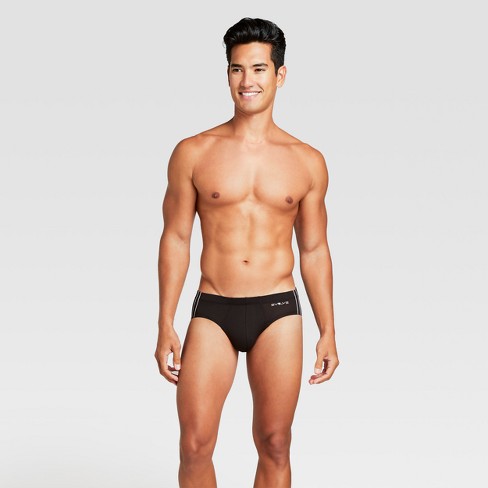 So I was in my neighborhood Target store recently, and on a whim, I decided to check out the underwear section. Last time I went I had been disappointed in the available selection and was presently surprised to see that they had revamped the area, with a few new options. I picked up the kind that looked the skimpiest. Surprising, right?

The micro mesh is not like it’s more risqué cousin regular mesh. The pairs are covered in small holes, which themselves are further subdivided by very thin thread into quarters, leaving a mesh fabric that isn’t too revealing. I’d compare it to Cin-2’s Zen line or 2xit’s own Sliq line if you are familiar with either of those.

Speaking of comparisons, I’d like to take a moment to see how this pair compares to other big name brief brands in my collection. Just how skimpy/unskimpy is it really? I compared it to some other 2xist briefs that I own, and while the leg opening hight is about the same on all of the pairs the evolve is a little bit bigger than the rest. So unless you feel that 2Xist’s main lines of briefs are too skimpy, if you are looking for small briefs you are better off elsewhere. The white stripes on the sides on the hips are a nice touch. These pairs are tagless too, and even though they are micro-mesh, the front is double layered so there’s no need to worry about showing off too much. Another positive is the price point. At only $12.99 US before tax, it wouldn’t be too costly to get a weeks worth of pairs for the same price as a couple designer name pairs instead. So there is some to like about these briefs.

Sadly, there are more than a few issues I have with the design. First, I am not a fan of the intermediate style waistband. It is too small to effectively grasp like a large waistband, nor does it give the pair a sleek look like on a pair without a waistband. I really don’t like this trend and hope it goes away. Also, The look of it is a little bit meh..but I am biased towards skimpier pairs, and this is marketed towards a mass audience of which this will probably be the skimpiest thing they have ever worn.

2xist had several other varieties in this new Evolve line, including cotton bikinis, and trunks, including some labeled under the Sliq line. If you guys are interested, I will continue to try these new lines from 2xist. Overall, it’s not great, but it’s not horrible either. Comfortable, with some perks, but nothing exceptional about them.

Still, the fact that this partnership between 2xist and Target persists is a good sign, no matter how good the product is. It points to a sign that men are starting to want more than the bare bones basics that have usually been pedaling in the past. It points to major retailers identifying this trend and making moves to try and get that market. Getting better underwear into more mad marketplaces at an affordable price point is a win in my book.

That’s one of our goals here at UNB, to get guys into good underwear no matter what the style. If you like the look of them, give it a try. About $7 per pair after tax is a good deal, and besides their questionable looks, they are reliably comfortable. Do you want us to review more styles from the Evolve line or other new semi-upscale brands that have begun to pop up in mass-market retailers like Target? Let us know in the comments below!

As always, if you have any comments or questions, you can find me on twitter at @underweardude .