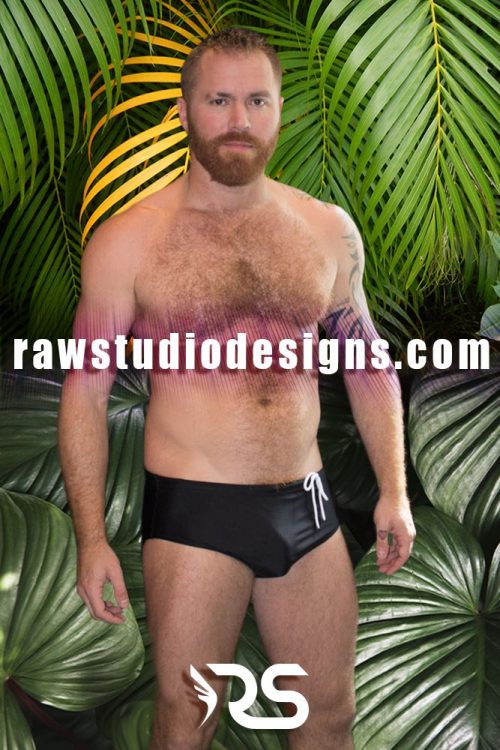 You may know Raw Studios from their awesome jocks. They make some of the best fetish and regular jocks on the market. But, they are more than just jocks. They have started their first line of swimwear! You may be asking what are the designs of the new line. Well, some may be shocked to know that they went more classic as opposed to some of their jocks! They opted for a Sunga design.

If you are a long time reader you know we have covered sungas. Sungas are the traditional swimwear of Brazil. Well, maybe unofficial. It’s bigger than a swim brief but smaller thank a trunk. It doesn’t have a pouch built in but the material forms one. You have seen this style on guys you see on beaches in Rio.

I really like the cut of the sunga and larger swim brief. I personally think they look better on more body types. This is a smart design decision from Raw Studios. The new line has two prints, two florals and one solid. The solid is a black, which is a classic in swimwear. This initial collection is pretty awesome from the brand.

The pricing isn’t bad on the collection either. It’s $45-52 a pair. While not the cheapest but definitely in the affordable range for most guys after swimwear. I know many of you out there are looking for a new swim suit for the season. If you are put this on your list! I don’t think you will be disappointed at all! While you’re at Raw Studios site, pick up a few pairs.