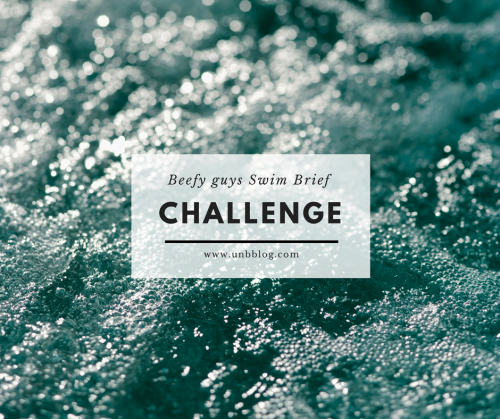 I was having a text convo with a friend who loves gear as much as I do. We have been friends for about 12 years. We were both saying that we are both starting a work out schedule to look better in our gear. We are both over 6’2″ and considered beefy. That is over 36 inch waists. Our pics and such feature guys who work out and should have no issues rocking a swim brief on the beach. Rarely does it seem guys over 36 inch waists are encouraged to wear a swim brief!

I think beefy guys look awesome in swim briefs. We as a group of guys should never rule them out because others think we don’t look good in them. I have talked to several guys over the years who feel they are being judged when going to a pool party and the muscle boys are in them and when they drop their shorts. The guys look over their sunglasses and nod no and look away. Have I had this happen to me, I’m sure I have over the years. At times I didn’t give any fucks, other times it made me feel insecure.

Very few reading this blog could walk out in front of a camera and be considered an “underwear or swimwear” model. Most of us are average guys. And I’m sure most of us are happy being average. I have said many years ago that I will never have abs because I will never eat that good nor will I work out that long. My goal for health and my well being is a 36-inch waist. There will be no 3-4 hour work out sessions 6 days a week. I have work, the blog, and a social life.

I plan on wearing swim briefs this summer when possible this summer. Being stuck in Atlanta there aren’t many places to wear them. We aren’t near a major body of water and private pools are few and far between. I hope more of you “beefy guys” will consider wearing them. I will continue to post my “body image” journeys here on the blog. I think it’s important to know that you are not alone in your concerns. It would be awesome if we could have a swim brief weekend somewhere with guys reluctant to wear them in public but get courage and confidence from others!

If you are a beefy guy and need courage, email me and I will def talk to you and share experiences. It’s about sticking together no matter if we are gay, straight, or bi. This blog is for all guys who love undies/swimwear/spandex and more. Note I don’t really have a picture to share of a beefy guy on the post.