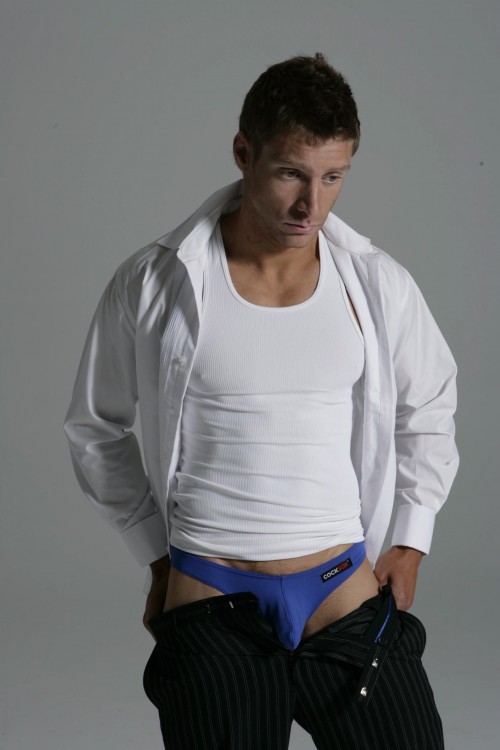 The Union Bank of Switzerland, now known as UBS for a more international appeal, with offices in 50 countries around the world and ranks as one of the worlds top global investment companies, has issued a 44 page dress code to its employees in Switzerland. If the program is successful it may spread to employees worldwide. Of course we are interested in this because the topic of underwear is addressed.

With 44 pages, can anything be left out?! An example of the details in this code is the requirement that men are not to wear the same lace up dress shoes two days in a row in order to give the leather time to breath. Men have to wear ties that match the bone structure of their face! When it comes to underwear, most of the regulations are directed toward the women; their panties always get more attention. However, men are not off the hook in the underwear department. According to the code, the male employees’ underwear must not show, and to quote from page 36, “underwear should only be made from high quality fabrics, easily washable but also remain in good condition after several washings”. Ok, if you’re never allowed to let them show why does it matter what quality they are? I guess no silk or dry clean only fabrics. When it comes to the visibility of men’s underwear, another page states “your underwear should be functional, and shouldn’t be visible through your clothes, nor should anyone be able to guess what’s underneath them”. So that means no jock lines and no bulges boys. Let’s hope the NFL never adopts this dress code or there would be no reason to watch football anymore. The issue that sparked the dictating dress code for the company to save face was the 69 billion dollar bail out the company received in the wake of the global financial crisis. Honestly UBS, I don’t think your bankers jock lines where the problem.

Having employees who look professional is an important aspect of public representation. I believe a company has every right to expect their employees to follow the guidelines set out by the company and represent the standards they have established. However, a business should respect an employee’s individuality and personal freedom to express themselves even in dress. There has to be balance between the two, employee and employer, a mutual respect for each others benefit.

When it comes to underwear in a professional setting, a man wouldn’t want underwear with a suggestive, offensive or even vulgar name around the waist line showing nor would he want to walk around “pitching a tent” in unsupportive underwear. Would a client of the bank really be offended because they could see the lines from a mans briefs? “Oh my God he’s wearing underwear!” I doubt it. You have to give the consumer some credit not to expect to be served by a robot with no individuality as if they lived in the “Leave it to Beaver” era. Yet again, there are people out there that do demand to be given the very best service and assume that everyone serving them will have the same standards, tastes and demeanor they do. It’s not right but it’s reality.

If these customers don’t receive that service from you they may go else where. These patrons are often the ones with the deep pockets that a bank needs. So maybe it is better to aim high since no one would complain about a teller looking too professional. I think the main thing UBS needs to remember is that their employees are people and should be given respect. If UBS employees feel brow beaten and unappreciated, that negative feeling will pass on to the customers. Attitude is far more important than looks. I wrote a similar blog a while back about a dress code for police officers in the UK and I’ll say the same thing to UBS I did to them. Let the guys wear sexy underwear; it will boost their morale and performance! Ultimately the success or failure of this dress code will depend on how UBS management presents it to the employees.

Vote in our poll below: