Here are the brands, both underwear brands, and retailers we have inducted into our UNB Drawer of Fame:

Jockstrap Central – Created to celebrate the jockstrap. Over the years, they have added more things than jocks. They have their own unique style. This includes what they sell and the models they use. Models have a more “real guy’ feel over a produced shoot. We feel they do many great things to contribute to the world of men’s underwear.

International Jock – One of the biggest stores on the net right now is International Jock. They have managed to stay strong when many other stores have faltered. The key to their success, we feel, is the breadth of their offerings. Meaning, back in the day, they were one of the first who had singlets and jock/cups. Things that you couldn’t find outside a sporting good store. Since then, they continue to add some of the best undies/swim/etc. on the market. One other reason they make our list is they use their own models. Their site has always looked consistent and fresh. It takes a lot of effort to do this. We say hats off to International Jock.

Pistol Pete – Sami Trab & Company – Pistol Pete has always marched to their own drummer. They have a specific style that no one has matched or even copied. They have held on to this design skill to this day. We have covered them since the start of UNB. It’s always great to see what they come up with each year. They create everything from swimwear, underwear, denim, spandex gear, and more. We think they deserve to be in our Drawer of Fame.

Go Softwear – Greg Olivera & Alex Hernandez – Go Softwear has been around for around 20 years. In this time, they have produced so many pairs, including those featuring armed forces, police, and firefighters. In recent years they have expanded with the American Jock line that features more athletic underwear and apparel. That’s not the only line; the Hard Core is a more fetish line that has really come on strong the last few years. Both Greg and Alex have been great friends to UNB. We are glad to have them in our Drawer of Fame! 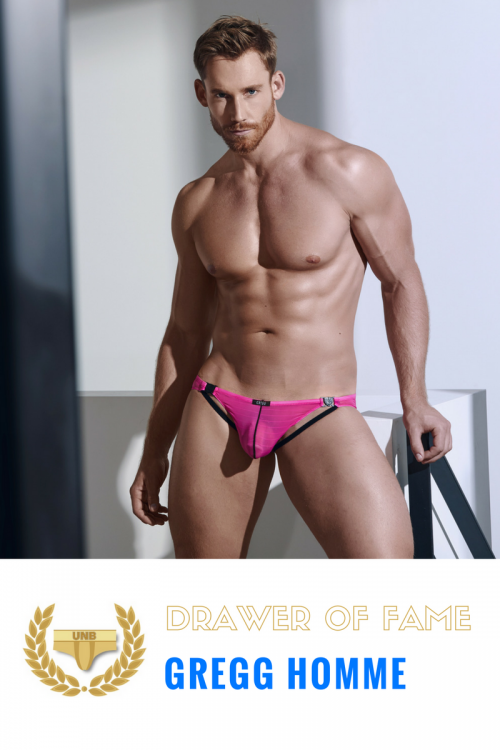 Where to begin with this amazing brand. They were founded in 1987 and have changed the world of underwear since. I have long said that Gregg Homme makes sexy underwear that is meant to wear. No matter what you do in their undies, you can almost guarantee you will be super comfy. Other fetish brands are made to be taken off after a few hours.

Their design philosophy is making the most comfortable, sexy underwear on the market. Well, that’s my take on them. One area they excel in is fabric. They source some of the most amazing fabrics in men’s underwear. They have become a leader in fabric. They try new things such as laser cutting, long before other brands. GH is a true innovator in the area.

This is their description:

Positioned right between lust and fantasy, GREGG HOMME puts to use the latest technologies and pioneering material to create the extraordinary and fashionable styles from classics such as string underwear and briefs underwear to outrageous fetish wear. Specifically designed with men’s comfort in mind, GH relentlessly pushes the limits of balance between functionality, modernization and fashion. With GREGG HOMME comes a design anatomically shaped for the male body: all fits are specifically engineered for the utmost pleasure of not only the wearer but also the people around.

We think the qualities mentioned above make them a perfect entry into our Drawer of Fame! 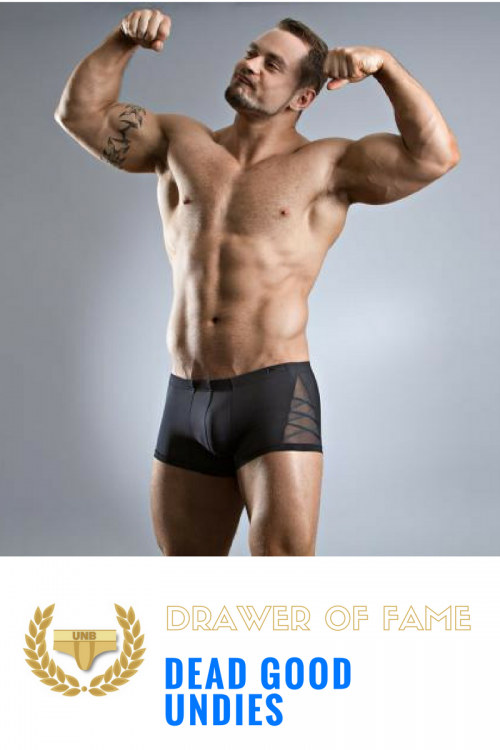 Dead Good Undies is a retailer most readers should know on UNB. They do a weekly column, “What’s Hot in the UK.” We have done this, I think 2009. The profile some amazing underwear and gear each month. Launching in 2007, just one year older than UNB! They have been a staple on the internet and stood the test when other stores have come and gone.

The world of retail is not easy! Adam and Jane at Deadgoodundies.com have created a store that is known for amazing brands and styles. They always seem to be looking forward to what’s next. There have been many times over the last 10 years of UNB that they have exposed me to new brands. Those brands include ManStore, Olaf Benz, Bruno Banani, and more. They have a very different take on underwear from the US Centric one we have at UNB.

Founded in 2007, Deadgoodundies.com is a specialist men’s underwear and swimwear website dedicated to the best designer fashion brands from around the world. Launched by website and undies expert Adam Davies and fashion journalist Jane Garner, DGU has gained a reputation not just for having a top notch selection of men’s underwear styles – but also swift deliveries, excellent customer service and a willingness to make sure customers get the briefs, boxer briefs, slips, strings, thongs or trunks they want, when they want.

We look forward to working with DGU for many years to come! 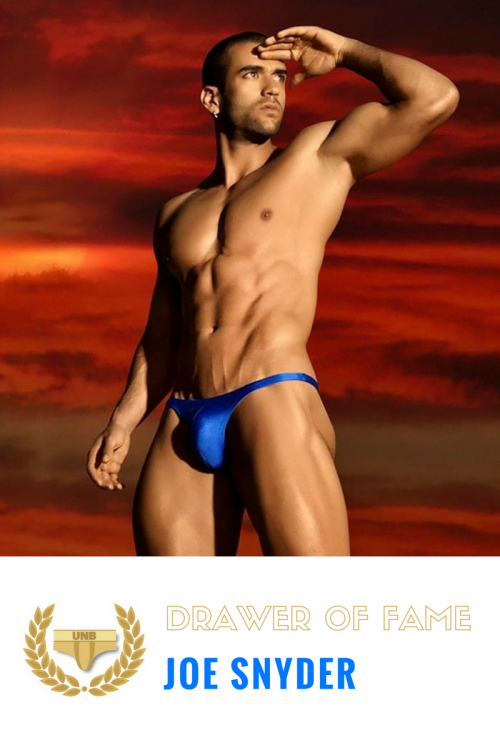 While Joe Snyder has never been one for creating massive lines, they focus on what they do the best. Bikinis and thongs! This includes just about every color in the rainbow. Where they lack in styles, they more than makeup in the color department. Recent releases include the Pride Frame and Sock It collections, build on the heritage of the brand!

If you get time, go to the Joe Snyder site and read their “about” section. They have an exciting story. Relaunching in 1991, they had a hard time re-establishing the brand, but they succeeded and have become one of the top brands of thongs and bikinis in the world. 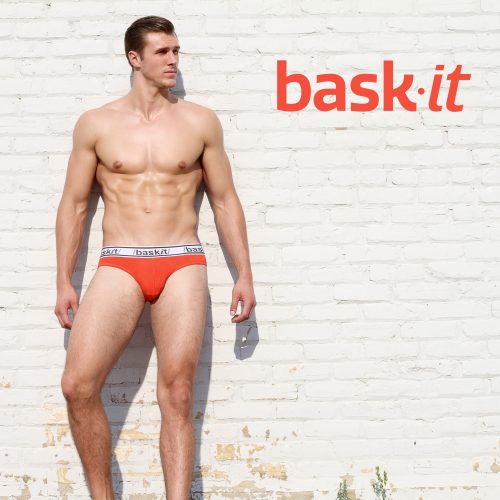 We induct Baskit into our Drawer of Fame this year! Baskit has been around for longer than UNB has been in existence. They have done two things that really shaped the underwear world. First, they had one of the first widespread, pink thongs on the market. It sold like crazy, and everyone wanted it! Second, they created the Jock Brief. Before we knew all about this, Hyrbird Baskit is the one that brought it to market and changed the face of underwear as we know it.

Born in 1999, Baskit is a clothing brand known for fashionable and high quality men’s underwear and swimwear.

Catering to the everyday needs of stylish men, Baskit clothing is functional, comfortable and bold. Made of premium materials and fabrics, our products stand the rigors of an active lifestyle under your clothing—from office to gym to a night out on the town.

Whether they choose our stylish BodyArt briefs, trunks or boxer briefs, the extremely popular Ribbed Collection of mens underwear, or our innovative Utility line of sport jocks, briefs, trunks and boxer briefs, our customers will discover the same threads of masculinity, smart design and individuality that personify the Baskit brand.

The Boy Next Door has been in the City of Atlanta for as long as I can remember. I think they just celebrated 40 years; I say this because I have been going since my 20’s and well, I’m much older now. The first time I walked in, it blew my mind. The store was filled with swim briefs, bikinis, jocks, thongs, and more. It was like I found my people. I would go regularly. We had so many other stores that sold underwear come and go over the years, but The Boy Next Door always stayed around. I discovered brands like LASC, PIstol Pete, Go Softwear, Andrew Christian, and long before, I would be working with them.

The Boy Next Door is going strong! They are still in Atlanta on Piedmont Road and now online as well. If you are in Atlanta, drop by and pick up a few things.