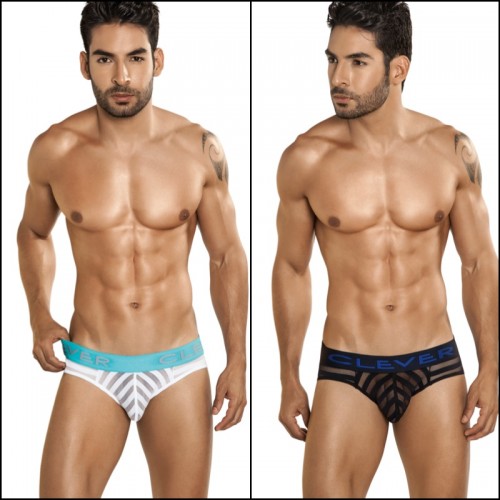 Mesh is a trend in men’s underwear that just keeps going. When it popped up a few years ago I expected it to take off then guys move on the next thing in underwear. Flash forward 3 years and the mesh trend is still going strong. Clever is one of those brands who has taken to the trend and made it really fun. They aren’t making just sheer underwear for the sake of making it they put some thought behind it.

Last year they released the Kansai Latin brief. It was super fun the black pair had a purple waistband and the white had a silver Waistband. They have continued this line with the new Eros Latin Brief now with updated waistband colors. The Black now comes in a black waistband with a bright blue Clever name showing. The while has a blue/teal waistband and grey writing. These two colors really make the pairs pop. The blue on the the black pair is something that is carried over into other pairs in the new collection as well.

If you are a fan of mesh underwear we think this is a must have for your collection. You will be able to find this at retailers online and in stores shortly!