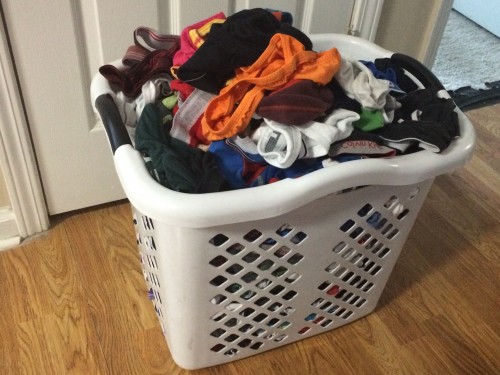 So I recently decided that it was time to scale back my underwear collection.  Gasp, yes I actually said that out loud.  Not to say I have a problem getting rid of them, but I do have a few pairs that I graduated from college with me a couple of decades ago.  The thing is, my tastes in underwear have evolved over the years.  I used to wear strictly briefs.  That was my thing.  I gradually added a few jocks here or there but only wore them for “special occasions”.  That worked for me for years and years.

Then I started to branch out and tried some skimpier bikinis.  What had I been missing all that time?  I was hooked.  So all those briefs went into hiding in my dresser and storage box in the closet.  In the last two years I have really started to enjoy wearing thongs as well.  So my beloved briefs began to gather dust.  About a year ago I decided it was time to purge the collection of the ones that I never wear anymore.  Some just didn’t float my boat anymore, others don’t fit as well (damn this aging thing).

I had a moment of silence as I began to sort through them, the pile of unwanted undies growing ever larger.  Was I really about to throw out so many pairs that had stood the test of time?  I had a hamper full of underwear to go through.  In the end they all went right back where they came from in the dresser and storage boxes.   The best laid plans and all that jazz went right out the window.

Fast forward a year.  I’m moving into a new home soon and have been purging all sorts of things from my current home.  Things that have been in closets since I moved here 4 years ago.  So it only seems natural that I revisit the idea of slimming down my underwear collection.  Realistically, I probably wear about a fourth  of them regularly.

Again I find myself in a dilemma.  What do I do?  I’ve gotten as far as separating the ones I know I want to keep and the ones that no longer fit.  There’s an entire drawer full of underwear that I should part with but am still on the fence about.  Every day I pull a pair or two out and either put it in the keep pile or throw it in the to-go box.  Every time I put another pair in that box I feel a little sad.  It’s like I’m saying goodbye to long time friends.  But hey, I’ve made lots of new “friends” lately and, since I clearly have an obsession, will be making plenty more in the future.  Out with the old and in with the new.   There’s got to be a therapy group for this somewhere.