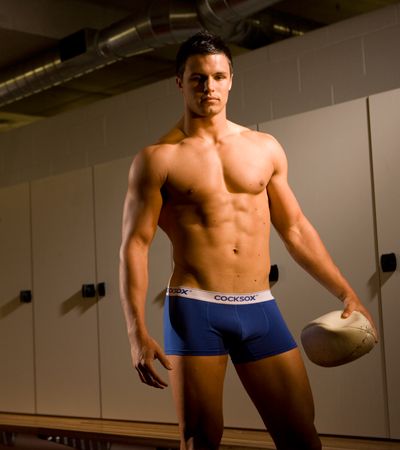 To be a winner, it takes hard work, rigorous training, a lot of practice, proper diet, and an extraordinary pair of underwear. For instance, some athletes will go to great lengths to avoid any change that could result in disrupting a winning streak. Some even go as far as refusing to change their underwear, wearing the same pair over and over again unwashed! Others have different yet just as compelling superstitions about their underwear. Adrian Mutu, a footballer for the Italia Serie A club Fiorentina, wards off bad luck by wearing his underwear inside out. Jason Giambi, of the Colorado Rockies, wears his lucky thong when he’s trying to break out of a slump. Giambi’s team mates have even reportedly asked to borrow the blessed thong believing that it really has brought about a positive change. Maybe this is a theme in baseball,. Audrey Huff of the San Francisco Giants wears his “rally thong” , a red rhinestone studded thong, for luck. This has inspired the underwear brand Papi of Miami to send the Giants three dress size boxes full of thong underwear of every color of the rainbow completely unsolicited! Casey Pucket, an Olympic cross country skier, said “if I have a good race, whatever socks I am wearing, whatever turtle neck I am wearing, that tends to be the go to. It generally is the undergarments”.

It’s only fitting that underwear serve such a special place in an athlete’s ensemble and heart. As the innermost layer of clothing, underwear is the foundation of our wardrobe. An athlete’s uniform serves a function of more than just looks. It’s practical, supportive and protective giving the athlete an edge in their performance. So naturally, the foundation of this important package is no mere collage of fabric. Underwear goes beyond its intended useful nature to that of a confidence booster. When you know you’re sporting an amazing pair of underwear it shines through in your actions and personality. That can be an amazing game changing boost for an athlete!

A study in the journal Physiological Science made some interesting conclusions after a series of experiments. Their conclusion was this: “activating a good-luck superstition, leads to improved performance by boosting people’s belief in their ability to master a task.” More precisely, they added, “the present findings suggest that it may have been the well-balanced combination of existing talent, hard training and good luck-underwear that made Michael Jordan perform as well as he did.” So men don’t take your underwear selection lightly. They can make you a legend!