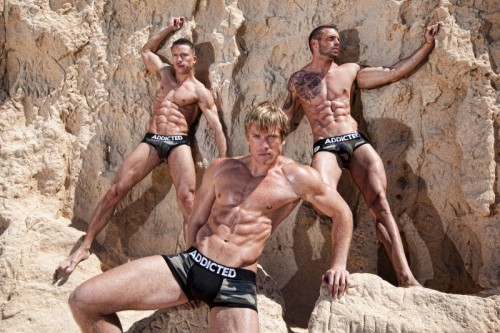 My answer to the question posed in the title of this post is pretty simple. It is my opinion that a man’s choice in underwear only reveals to what extent he has thought about underwear as it relates to him. To me, any other personality trait we think his choice in underwear might reveal is nothing but hypothetical inference.

My father is the perfect example of what I’ve written up to this point. He wore briefs until, “all the stuff about what briefs can do to sperm,” (late 80s) and has been wearing plain boxer shorts ever since. According to the consensus, his preference in underwear supposedly indicates his “laid back, and non-chalant” personality, and that he views underwear as a somewhat “burdensome necessity.” My dad is anything but “laid back,” he wears boxers for two reasons that I can tell. 1.) His thirties started in 1993 and ended in 2003, a time when the answer to “boxers or briefs?” was required of a Presidential candidate. 2.) I don’t doubt he’d love how a pair of high-end designer briefs with a contour pouch would feel, if the same type of people who write these articles didn’t perpetuate false narratives/stereotypes about briefs that the public has come to accept. His overall “style” is not boring, he cares about what he looks like and has great taste in clothing.

It’s time for a re-write that is as assured in its finality as these lazy attempts before it have been in their ignorance. In the guide to come, keep in mind that this is an attempt to re-write the consensus about each underwear style in the two relevant areas. First, is what your style preference says about the extent of which you’ve actually thought about your choices. And second, the inferences from your choice that may “reveal” additional personality traits about you.

I just think it’s high time for someone who has the credibility as an “expert” in the field, to compose a guide that is influenced by actual knowledge of the various styles available to men these days…

Brandon’s Guide To What The Style of Underwear You Favor, Might Reveal About You

Traditional Briefs: If your preference in underwear for every day wear is a spitting-image of the pair you wore on “Show and Tell” day in first grade, it’s obvious that you’ve given underwear little to no thought. NEWSFLASH! It’s 2012. Show and Tell is conducted through cell phones as thinner than half of your wallet. While I think the consensus has been that you’re “immature,” I’ll stick up for you and say, you just don’t know any better, but my congeniality comes with an expiration date.  If you want to stick to briefs, there are tons of options out there that do what your “tighty whities” always have sought to accomplish but never could, due to their 19th century design. – While I’ll keep my personal opinions of “hipsters” and their ilk to myself, wearing the colorful American Apparel version “ironically” is almost as indefensible. In either case, what might be inferred from your choice of this style for your every day wears is one of the least attractive personality traits out there-apathy.

Modern Briefs: If you’re wearing a pair of these, your choice in underwear is important to you. Your wife, girlfriend or boyfriend is probably not comfortable making underwear purchases for you. At the very least, you’ve been conscious enough to make the transition from traditional briefs because you don’t want to be behind the times. One thing is for sure, you value the support you get from briefs and it’s somewhat likely that you have “transitioned back” from either boxer briefs or trunks because the new cuts and fabrics give you even better support while staying off of your legs. You’re probably fashion forward, which is a good thing since your choice in underwear gives you endless options.   Personality wise, your choice will likely reveal that you’re at least somewhat outgoing and definitely “sociable” and you might even be the “life of the party” on occasion, but only on occasion.

Bikini Briefs:  This is really a sub-category of the former, as few retailers separate the two. If you’re a bikini brief guy, you’re probably just a bit more in tune with your underwear preferences than the guy wearing the modern brief. The bikini brief wearer evolved from wearing modern (low-rise) cut briefs after experiencing the larger leg openings and a little less coverage the bikini brief provides. He also appreciates support and has realized the hidden secret of this style (bikini cuts tend to offer larger pouches and thus more support due to their cut). “Enhancing” briefs can be contained in this category, and it’s likely that the bikini brief wearer may be a little less modest about being “caught” in his underwear. In terms of personality, the bikini brief wearer might be apt to be the life of the party more often than his modern brief-only brethren, and might be a little more confident in general, but in the bedroom specifically. Additionally, he’s not afraid of breaking away from conformity, or social norms and his love for this style is likely to lead him to the even skimpier styles available to him.

Welcome to the Skinzwear Jungle