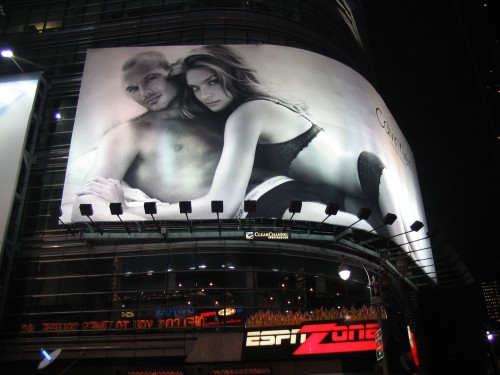 In Part 1 of this two part “mini-series” I talked about something that has bothered me (primarily as a straight dude in an arena that’s largely occupied by, and thus catered to, gay dudes) about men’s underwear in the United States, which is the double standard this country applies to men and their underwear. Forty years ago a woman’s “intimates” were just that, intimate only she (and her husband) knew about them. In 2012, society is completely accepting of 200-foot billboards of a Supermodel in a demi cup bra and a thong draped on the side of a building in New York City. Yet, if a guy is caught in a pair of orange bikini briefs, societies reaction is, “we don’t really need to see that” – even if he’s got three percent body fat. More importantly, I gave two reasons for why this double standard exists.

The first was that America is still attached to its puritan sensibilities in many ways, and it hasn’t gotten past them when it comes to well, a man’s penis, and therefore neither have they gotten past the underwear that touches it. And the second: Despite the fact that today, men have just about the same amount of choice in underwear as do the ladies, should any single man deviate from the boxers or boxer briefs in colors pre-approved by our puritan sensibilities, he may, and more-than-likely be subjecting himself to ridicule that’s devoid of these realities and worse, steeped in homophobia.

In order for the prevalence of any negative stereotypes and double standards to be reduced, the “thing” being stereotyped must become “common.” So, when it comes to men’s underwear, all of the styles and colors that society perceives as “gay” or “taboo” must start to make their way into department stores. I truly believe if just that were to happen, we’d slowly start to see minds open about men’s underwear, but it’s much easier said than done. The reason is because department stores have “buyers” who purchase the underwear directly from the designer, rather than the designer providing whatever cuts, styles, or colors to them it wants. The problem is that the majority of these buyers make their purchasing decisions based on the pre-determined stereotypes I’ve discussed already. And far too often, designers do not take a hands-on approach in the process, emphasizing their desire to see some of the “riskier” styles or colors on store shelves alongside “the basics.”

Thankfully, some underwear designers have recognized that the only way to bring their concepts into the mainstream is through mainstream market saturation. Leading the way seems to be Andrew Christian. He recently made a deal with Nordstrom to carry several of his products (all of which push the boundaries of conventional and stereotypical wisdom about what men’s underwear should always be) in select department stores around the country, and an even greater number of them on Nordstrom.com. While in Chicago recently, I stopped in the humongous Michigan Ave. Nordstrom which was retailing his underwear. I asked the guy working “The Rail” section how well the underwear was doing, his response was “we can’t keep it in stock.” I wasn’t surprised at that answer, but was surprised when he responded to my next question which was more pointed. I asked him how the underwear was selling among straight men, to which he replied, with something along the lines of, “a lot, which was really surprising to me at first, but we get a lot of (straight) guys who’ve bought one or two pairs that come back for more and some of them have told me how much they like them.” It was really music to my ears.

I took away two big things from the conversation (and the very picked over selection of underwear). The first was that great underwear both in terms of how it fits and how it looks, can make its way into the mainstream in spite of it being of unfamiliar design.  And perhaps more importantly, it proved what I have been saying over the course of this two-part article correct—a big reason these stereotypes exist is that for far too long, both the designers and the buyers looking to sell their underwear have subconsciously been perpetuating these stereotypes by limiting society’s exposure to new concepts.

The amount of minds that need to be changed simply won’t be changed by more exposure to new concepts in a few department stores or on their websites. If my dad catches a glimpse of any one of my 20-some odd pairs of colorful Andrew Christian briefs, he still will not inhibit a judgment or comment. And even if more department stores follow Nordstrom’s trend offering in-store retail that is guaranteed to change minds or at least, perceptions, the Sarah Millers of the world will continue to write articles in Men’s Health conveying to straight men that women want their underwear to be boring and uncomfortable. My point is that it’ll likely be a few more years before Jason Scarlatti doesn’t have his newest collection giggled off the set of the Today Show, but the remedy to all of these things is clear.

As Nordstrom receives quarterly sales reports for each of its stores, it will see how the Andrew Christian and C-IN2 underwear are flying off the shelves. They’ll respond by making more of it available at far more locations, and instead of the trendy 18-35 section, they’ll be able to directly compete with the Calvin Klein’s in the underwear section at each store. Satisfied customers will seek out the designers’ websites, where they will be exposed to things like fashion jock straps and thongs. Slowly but surely more department stores will be offering the new concepts and while basic white, black, and grey briefs, boxer briefs and boxers will never go away (nor should they) they’ll no longer be the average guy’s only choice when he needs a couple new pairs.

Make no mistake. The problems I outlined in Part 1 will continue to rear their ugly heads from time to time. The double standard that has been set about men’s underwear-that it must be utilitarian and boring can (and will) be eliminated by courageous designers bringing their new concepts to department and retail stores. When that happens, the stereotypes will naturally fall by the wayside, and finally, finally straight guys who stumbled into the fascinating and evolving world of men’s underwear no longer have to evangelize in anonymity.