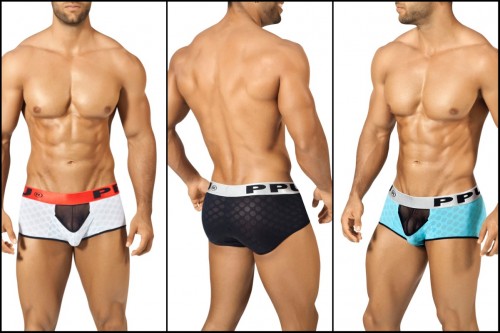 The pair of underwear I am reviewing is the PPU Boxer #1322.  Before trying these on, I enjoyed taking in the big picture.  The white fabric has see through polka dots, the waistband is red with contrasting black logo sewn in, the leg openings have black piping to contrast with the stark white and bright red, and there is a black mesh area above the pouch for a peek-a-boo effect.  Interesting.  The PPU logo sits on each side and is not centered over the pouch which does not bother me like it bothers other guys.  The red waistband has a metallic sheen to it which I really enjoyed.

After trying them on, the waistband is comfortable at nearly two inches in width.  The slight pouch was accommodating, conforming, and defining.  While this is a boxer, it felt more like a brief.  Companies seem to have their own take on what defines a boxer and in this case I suppose a slightly longer side panel is the key.  The boxer was pieced together in multiple pieces to create the pouch and had a seam down the center of the rear for even more definition of the assets.  The black mesh panel shows off the area above the bits and the upper portion of the bits, as well.  It is quite erotic, in my opinion.  This boxer comes in several colors (mint, white, black) that most anyone would enjoy.  This is my second pair of PPU underwear and I like them.

While wearing this pair of underwear, I went on an extended shopping experience over an eight hour period with lots of walking, bending, and trying on clothes.  It was a busy day filled with quite a bit of activity that tested the underwear under normal circumstances for most guys.  The pair fit well, looked good, did not bunch up, did not ride up, and felt like I did not have underwear on at all.  This pair of underwear would be good for a night out on the town or everyday wear, but not for exercising or major activity.

I received a size extra large in this boxer.  This size should cover a 34-36 pant size.  Sizing was not true to size as I am a large in the vast majority of underwear, but this is a non-issue as the company tells you that the XL is a 34-36” size.  So, size up.  This pair can be found for around 21$ on most websites. 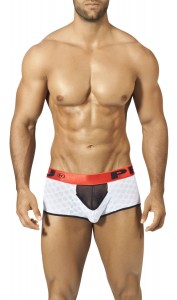 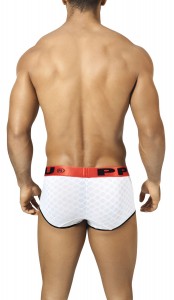 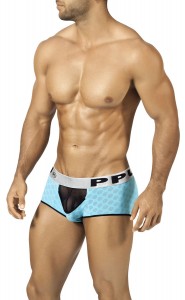 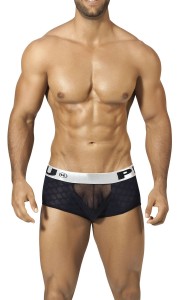 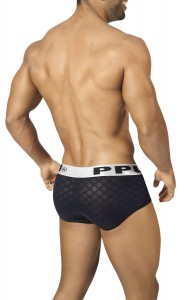 I loved the polka dot see through pattern that made up the body of the underwear, the metallic red waistband, the black contrasting piping around the legs, the black mesh see through peek-a-boo panel, and the way the crotch area felt against my skin.  82.5% Nylon and 17.5% Spandex fabric combination makes this a slightly stretchy and conforming pair of underwear that I enjoyed.  The rear seam was another part of the boxer that I enjoyed as it showed off the assets.  This boxer had nothing about it that I could complain about.

Overall, this was a nice pair of underwear and I felt sexy and comfortable at the same time while wearing them.  The design is conforming to the body and creates a fantastic profile from the front and the rear.  I did find that one could take the pouch and pull it down and under the package to push up the mesh pouch area and create a totally different look for the boxer.  I enjoyed this boxer and look forward to wearing it again.

PPU furnished these for review.