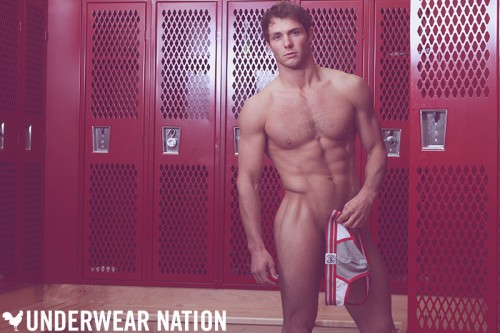 I met Jerrad and Todd in February of last year in Vegas at Project where we get to see all the new trends in men’s underwear. I was really excited to meet them because I had heard a lot about their new company, Underwear Nation, and wanted to learn more about how they got the idea to start an underwear retailer. We sat down in the luxe Cosmopolitan after the underwear show and talked. Underwear Nation is always a topic of conversation on the underwear scene! If you aren’t familiar with the online store I am sure you know their amazing photography that seems to pop up all over the Internet.

I started our conversation by asking them how Underwear Nation got its start. As it turns out, Jerrad and Todd were acquaintances from over 15 years ago that parted ways after meeting at a random party. Jerrad was leaving to dance on a cruse ship, and Todd was moving to Chicago to pursue his business career. Several years later Todd was combing the Internet for hot guys and saw Jerrad’s work on a blog. After rekindling their friendship, Todd hired him to do a photo shoot for a bar he was working at in Madison. The rest is history!

Both fans of (hot guys in) underwear they talked about how they wanted to do something in industry. “We had a great brand name in Underwear Nation. And we wanted to create a solid business plan that would surge into the Men’s Underwear industry and set us apart.” Todd and Jerrad launched Underwear Nation as an Underwear of the Month Club where members would get a pair of briefs, boxer briefs or jockstraps every month. In addition, they wanted to provide a curated retail experience with great editorial content such as Jerrad’s original photography every month. As UN has evolved they have begun releasing new men’s underwear product lines through a monthly Issue with a themed photo shoot such as the very popular Varsity series set in the locker room featuring Timoteo.

As they have grown over the past 18 months, like most entrepreneurs, Todd and Jerrad have had some challenges along the way. Jerrad mentioned “the constant deadlines of a small team that create a lot of creative pressure for us.” And being an online retailer has presented lots of issues as the company continues to grow. “Sometimes we have to stop everything and work on technical issues…things that necessarily aren’t our strength, but are important for the growth and viability of the company,” Todd said.

I asked the team at Underwear Nation what surprised them as an Internet retailer. They mentioned how awesome it was to have a global customer base, and how cool it was to get orders from everywhere from Australia to Israel. And with the global presence, Jerrad and Todd are eager to see the company grow and expand to become one of the largest underwear retailers on the Internet. Todd added, “Not only do we want to continue to improve our curated product selection in our store, but we also want to continue to engage our customers in new and interesting ways.” At Underwear News Briefs we know it will be amazing and I can’t wait to see the progress!