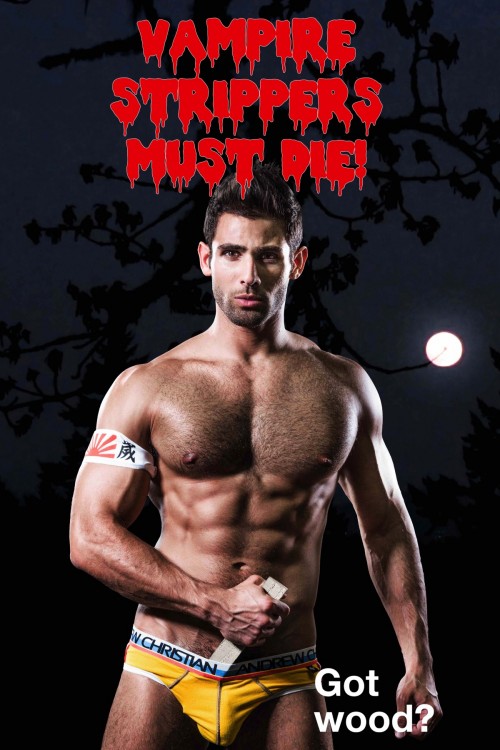 We continue our series on the Vampire Strippers Must Die. This time interview Pablo Hernandez. You may have seen him in some of the underwear modeling he has done in the past. Here are his answers to our questions about the movie.

Vampire Strippers Must Die the preview looks like a super fun movie. What made you do this fun film?

Just getting to audition for a vampire role was such a cool opportunity! And he’s a stripper! I jumped at this role!

It’s been said it’s a Mix of Magic Mike meets Buffy the Vampire Slayer. Can you tell us about the movie?

It’s fun, it’s campy, it’s so me! I’ve tried to dig into my character and his relationship with his brother Matt by picking on Sam Ortiz as often as possible off camera.

What can you tell us of the Overnight Male Dance Troupe, and what we can expect from them?

I expect that each of us will bring some sexy and different moves to the stage. I know Bryant has some body rolls that give mine a run for my money.

Did your previous modeling experience help you get this role?

When the director of the film, Keith, reached out to me, I think he had some sense of my career. I feel that my modeling is only successful because of my acting skills. I’m not a model that thinks he can act. I’m an actor that loves to role play and the role of model has been my longest running part.

Can you tell us about your character in the movie?

Do you have any hesitation being in underwear on the big screen as opposed to pictures?

Not really. I know most normal people are not comfortable being in their underwear in public, but I’m most comfortable that way. My years of experience make it easy for me to be move on camera instead of just standing and posing.

If you like these interviews go support the movie with their Indigogo campaign!